Smart bombs for IAF: How does US JDAM differ from Israeli SPICE, French HAMMER?

LCA could become first Indian fighter to carry US munition 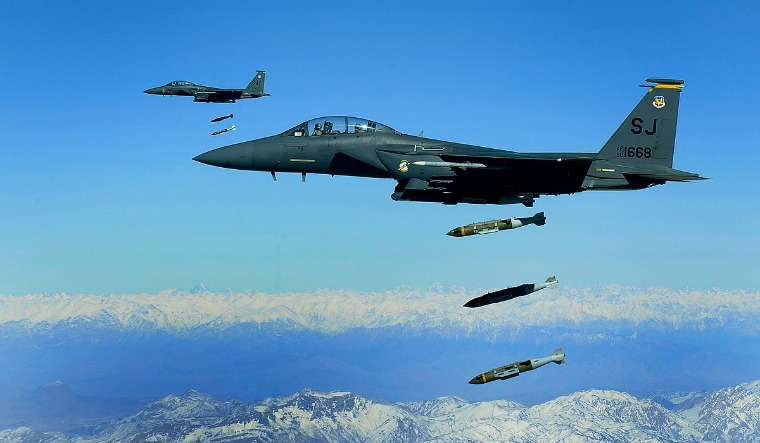 During the Kargil war in 1999, the Indian Air Force's fleet of Mirage 2000 fighters proved instrumental in hitting positions of Pakistani infiltrators. The Mirage 2000s used laser-guided bombs (LGBs) for this role, with the bombs launched by the aircraft following the reflection of a laser beam to their targets.

Twenty years later, the Mirage 2000 remained the platform of choice to carry out the airstrike on Balakot to avenge the Pulwama suicide bomb attack. But for the Balakot airstrike, the Mirage 2000s carried an Israeli-built weapon, known as Smart, Precise Impact and Cost-Effective (SPICE).

Laser-guided bombs were among the first weapons to be known as 'smart bombs', which had much greater accuracy than the air-launched unguided, ‘dumb’ bombs used in conflicts up to the 1970s. In the LGBs, used in Kargil, the laser beam could be illuminated by the aircraft or soldiers on the ground.

While the laser-guided bombs were and still are highly accurate, their accuracy could be degraded by adverse weather such as thick cloud cover, fog or rain and the use of a targeting laser meant the range of the weapon would typically be only a few kilometres. On the other hand, the SPICE belongs to a newer generation of smart bombs that use multiple modes of guidance such as satellite and electro-optical sensors to allow for greater range and versatility.

Months after the Balakot attack, reports emerged the Indian Air Force was planning to integrate the SPICE munitions on its fleet of Russian-designed Su-30MKI fighters. In 2020, even before the first Rafale jets were to arrive in India, reports said New Delhi was ordering a French smart bomb known as the Highly Agile Modular Munition Extended Range (HAMMER) for the new jets.

After the SPICE and HAMMER, another smart bomb appears to be headed to India. Earlier this week, ANI reported that the Indian Air Force had “recently signed a contract” to acquire the Joint Direct Attack Munition (JDAM) from the US for its fleet of indigenously built Light Combat Aircraft.

So how similar are the JDAM, SPICE and HAMMER?

All three systems are not bombs in the technical sense. They are kits that can be fitted to existing unguided bombs. The systems consist of guidance units, fins, wings and other equipment that are bolted on to existing dumb bombs or even laser-guided bombs to turn them into guided, ‘glide’ bombs that fly to their targets.

But all three systems also have vital differences and offer distinct capabilities:

While the JDAM may be entering Indian Air Force service after the SPICE and HAMMER, the US-built weapon is actually the oldest and simplest of the three systems.

The JDAM equips a dumb bomb with a new tail section that has an inertial navigation unit and global positioning system for satellite navigation and tail fins. The JDAM kit can be fitted onto a number of bombs used by the US and its allies such as the 907kg, 454kg and 227kg bombs. The fins give it a range of over 20km, which is considerably more than most laser-guided bombs. In addition, satellite guidance is impervious to most forms of adverse weather. The JDAM was first used in combat in the NATO intervention in Kosovo in 1999. According to its manufacturer, Boeing, over 400,000 JDAM kits have been supplied to the US military and 26 international users. Pakistan has received at least 500 JDAM kits for use on its fleet of F-16 jets.

A US Navy fact file gives the cost of a single JDAM to be “approximately $24,164”, which is considerably cheaper than the HAMMER and SPICE. However, most JDAMs suffers from a major vulnerability—their reliance on satellite guidance. While satellite guidance is highly accurate, countries such as China have been developing technologies to jam GPS signals, potentially threatening the utility of the JDAM.

Over the past decade, Boeing and the US military have worked to improve the JDAM, including boosting its range, giving it capability to hit moving targets and also developing a version with laser guidance. Boeing has also developed a powered JDAM (PJDAM) that adds a JDAM kit and a small jet engine to a 227kg bomb, giving it a range of 300km and turning it into a miniature cruise missile.

Rafael, the manufacturer of the SPICE, declares this weapon offers a “GPS-independent” mission capability. Like the JDAM, the SPICE kit also equips a bomb with fins, wings and a guidance kit. In addition to satellite guidance, the SPICE uses an electro-optical seeker that scans for a target on the ground, which is matched with the weapon's on board scene-matching algorithm for confirmation.

The SPICE bomb can also be reprogrammed in the air to hit a different target or use a different 'hit angle' to destroy a particular part of a target to ensure greater destructive power. The SPICE kit offers a range of 60km for 907kg bombs and 100km for 454kg bombs. A new SPICE variant, dubbed the SPICE 250, has also been developed, which is a 113kg weapon that can hit targets 100km away.

In 2019, Rafael claimed it had integrated artificial intelligence and deep learning into the SPICE system to better engage moving targets.

Unlike the standard JDAM kit and SPICE, the HAMMER has features of both a missile and a glide bomb. Safran, the French company manufacturing the HAMMER, claims it “adds a propulsion kit and a choice of guidance kits to standard bombs”. The HAMMER can be integrated with a variety of guidance modes such as satellite guidance, infrared seeker and laser. According to Safran, the HAMMER can be fired at ranges of anywhere between 20km to 70km, enabling the launch aircraft to stay out of range of enemy air defences.

The HAMMER kit can be fitted to bombs of different sizes: 125kg, 250kg, 500kg and 1,000kg, with the last type meant for 'bunker buster' missions. The fact that it is propelled allows the HAMMER to be used at low altitudes or in hilly terrain, unlike normal bombs that are unpowered.

In 2017, a French media report said Safran was working to reduce the cost of the HAMMER from 120,000 Euros to around 80,000 Euros a piece, which is still considerably more expensive than the JDAM.

While the exact per-unit price of the SPICE remains unclear, both the French and Israeli weapons suffer from the problem of economies of scale when compared with the JDAM. In addition to the simpler nature of the JDAM’s technology, the US military’s large size and requirements mean the number of JDAMs in service is significantly more than number of SPICE and HAMMER bombs being built. This ensures the US weapon has a significantly lower unit cost.