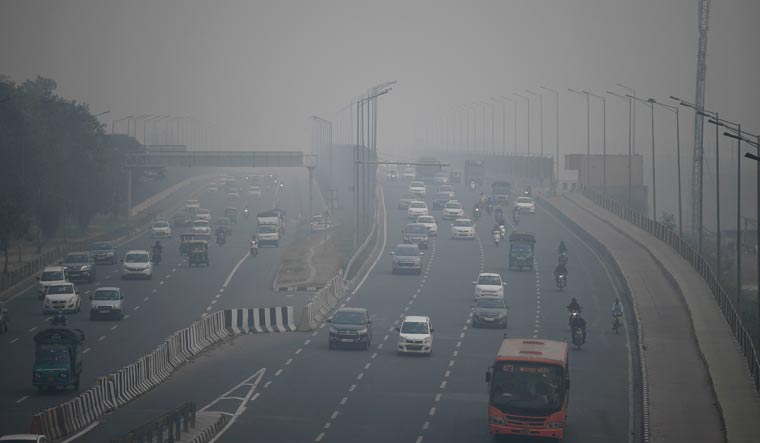 Delhi is often named the world’s most polluted capital city, while a host of other Indian metropolises consistently top the lists of the world’s urban areas with the worst air quality.

In Delhi, levels of particulate matter measuring 2.5 microns or less in size (PM2.5), which pose a serious health risk, often reach levels that are 17 times higher than the World Health Organisation’s designated safe limit. The city, meanwhile, has put several measures in place to tackle the problem.

Delhi is not alone in facing this issue; poor air quality is a major concern for cities across the world. However, while particulate matter is often the main focus, understandably from a health point of view, it is just one of the measures of air quality.

When it comes to climate change, the bigger culprits are greenhouse gases (GHGs). Carbon dioxide, the primary GHG emitted by human activity, is a primary concern, followed by carbon monoxide (CO), nitrogen oxide (NO), nitrogen dioxide (NO2), and ozone (O3) that are hazardous to health.

When you consider the fact that together the world’s cities produce more than 70 per cent of global carbon dioxide (CO2) emissions, it makes them instrumental in the battle to curb emissions and keep climate change under control.

Calculating CO2 and other GHG emissions is usually achieved by looking at consumption data – how much fuel factories, households and traffic have consumed in any given period – and then extrapolating from there. Often this information only becomes available after a year or two.

A better idea would be to directly measure levels of GHGs in the atmosphere in real time. Not only would this provide an up-to-date picture of air quality at any given time, but by placing a great many sensors in a dense, evenly-spaced network, the source of the GHGs could be determined.

Such a dense sensor network is being established in Glasgow, host city to the COP26 summit in November, as part of a pilot project between the University of Strathclyde and Glasgow City Council, within the framework of the Global Environmental Measurement and Monitoring Initiative (GEMM), an international project of Optica (formerly OSA) and American Geophysical Union (AGU). Other partners include Stanford University, the University of California, Berkeley (UC Berkeley), the Met Office and the National Physical Laboratory.

A similar initiative will get underway in Delhi following an agreement between the Delhi Pollution Control Committee and IIT Kanpur for a “real-time air pollution source apportionment and forecasting for advance air pollution management” project.

Collecting air samples is only one part of the picture, however. These then need to be combined with atmospheric transport models to help understand where air is coming from and to separate natural sources of GHGs from man-made ones.

The data generated by the sensors need to be interpreted and inverse modelling techniques used to identify the sources of CO2 samples that have been observed.

This information would offer city leaders and policymakers a much more detailed picture on the sources of GHGs and provide near-instantaneous insight into the effects of any decisions they take to tackle emissions and pollution.

Such a network need not be overly expensive. The Glasgow project uses low-cost sensors, built and provided by a team at UC Berkeley, led by Ron Cohen, a professor of chemistry and of earth and planetary science. At $8,000 each, these are much cheaper than traditional air-quality monitoring stations which can cost around $200,000 each.

Professor Cohen has been operating a network of 70 sensors across the San Francisco Bay Area for the last eight years as part of the Berkeley Environmental Air-Quality & CO2 Network (BEACO2N) project.

During COVID-19 lockdown in California, the BEACO2N network recorded a 25 per cent reduction in CO2 emissions in the San Francisco Bay Area due to a 50 per cent drop in road traffic. It was a demonstration of the utility of such a network.

Real-time monitoring promises to provide city leaders with the information and tools they need to achieve net zero ambitions and play a major part in the global effort to control climate change.

During COP26, the GEMM initiative will hold the 'Cities are the Key to the Climate Solution Summit' on November 3 to showcase this approach and encourage other cities to set up their own networks.

Bringing scientists, sensing and data technologists, policymakers and economists together to solve these multidimensional and multisectoral climate and emissions challenges is absolutely vital. There is an ever-increasing need for more accurate environmental data, improved measurements and forecasting models so that we can better develop the strategies and policies that we need to adapt to or mitigate the impacts of climate change.

Allister Ferguson is a professor of Photonics & co-lead of the GEMM Initiative, University of Strathclyde, Glasgow, UK