Orbiting nuke or hypersonic glider or both? What did China test, why it matters?

China's foreign ministry issued a denial on Monday, which added to the questions 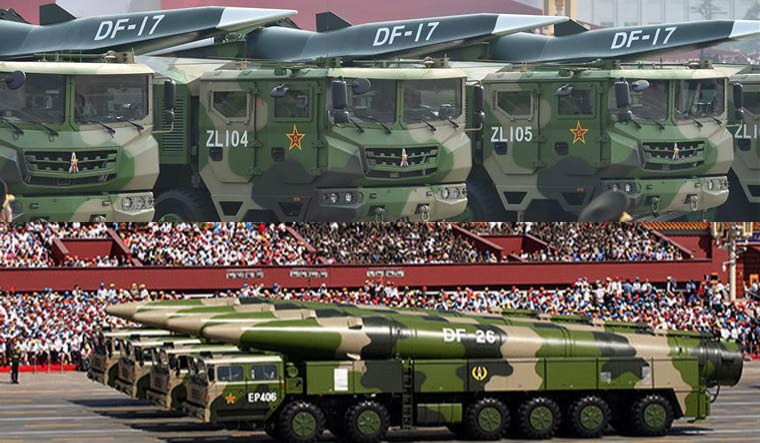 A report in the Financial Times on Sunday about China testing a secretive hypersonic missile system in August that orbited the earth has provoked concern and questions.

China's foreign ministry issued a denial on Monday, which, not surprisingly, added to the questions. The Chinese government said it tested a hypersonic "vehicle, not a missile". The spokesperson claimed the test happened in July, contradicting the report in Financial Times.

Reacting to the test, a number of arms control experts said the new Chinese weapon appeared to have characteristics of a "Fractional Orbital Bombardment System", a weapon system developed by the erstwhile Soviet Union in the 1960s.

Popularly known as an 'orbiting' nuclear weapon, the FOBS was a nuclear warhead launched from an intercontinental ballistic missile (ICBM) in much the same way as any other nuclear-armed missile. However, after launch, the FOBS would enter a low orbital path over the earth, at an altitude of about 150km. The FOBS was developed in response to the massive edge the US had in early-warning radars in North America and across the Western Hemisphere to detect Soviet missile launches. The lower orbit allowed the FOBS to evade detection by radars.

Instead of flying the shorter route over the North Pole to hit targets in the US, a FOBS could travel over the South Pole and approach the US over areas that had little radar coverage. Soviet planners believed such a weapon would reduce US early-warning time to around five minutes. The term fractional orbit was chosen to comply with international agreements such as the Outer Space Treaty that banned the deployment of nuclear weapons in space. The US Air Force Magazine explained FOBS as a weapon that "would never complete a full orbit and thus would be in compliance with the letter of the international accords".

The purpose of FOBS was not to hit precision targets such as US ICBM launch sites as the weapon had a lower accuracy, given its parabolic trajectory. Instead, FOBS was to be aimed at major power centres such as Washington DC. Air Force Magazine reported in 2005 that the Soviet Union built 18 FOBS launch silos and deployed its first operational unit by 1969. These weapons were decommissioned by the mid-1980s.

China also briefly worked on a FOBS project in the 1970s, which was cancelled, reportedly, due to technical issues.

In addition to characteristics of FOBS, the new Chinese weapon was also believed to have carried a hypersonic glider. China has tested and even displayed hypersonic weapons before.

The DF-17 hypersonic missile was displayed at a military parade to mark 70 years of the establishment of the People’s Republic of China in 2019. Hypersonic weapons travel at over five times the speed of sound and are considered very difficult to intercept by existing ground-based defences. According to reports, China tested the DF-17 twice in 2017, with the weapon travelling about 1,400km in one test.

While a ballistic missile also has hypersonic speed, a hypersonic glider—which is meant to fly in the atmosphere, as opposed to space—has a major advantage: It is significantly more manoeuvrable.

US Defence website The Drive explained the significance of this capability in an article. "Using a hypersonic glider of some kind as the warhead-carrying portion of a FOBS adds a new dimension of unpredictability to the weapon. The glider would provide a highly manoeuvrable platform to bring the warhead to the target, giving it much more significant capabilities to either dodge enemy air and missile defenses or simply strike from an unexpected vector where there are no defences," The Drive reported.

Arms control experts questioned the efficacy of combining a hypersonic glider atop a FOBS. In a Twitter thread on Sunday, Joshua H. Pollack, editor of Nonproliferation Review, tweeted, "A glider can also evade defenses, but putting one in orbit à la FOBS renders that advantage moot".

Pollack argued the Chinese weapon "may be multi-functional, like Russia’s Sarmat, capable of delivering weapons via different trajectories".

The Sarmat is an ICBM that was one of six cutting-edge strategic weapons unveiled by Russian President Vladimir Putin in 2018. It is believed to be capable of carrying a large number of multiple independently targetable re-entry vehicles (MIRVs or separate nuclear warheads) or hypersonic glide weapons as well as countermeasures to dodge enemy defences.

Pollack noted "An over-designed missile with both glider and FOBS capabilities could be the PLA’s way of staying ahead of diversifying, improving defense systems." He argued China's aim was to "have the flexibility to evade defenses in an unpredictable manner". He equated the new missile to a Swiss Army knife.

He referred to the deployment of ballistic missile defence systems on multiple US Navy ships that are capable of shooting down ICBMS. Unlike land-based early-warning sites, ships can move around, expanding both range of radar coverage and distribution of interceptor missiles to target incoming ICBMs.

Another expert, Ankit Panda, a senior fellow with the Carnegie Endowment for International Peace, also agreed the new weapon was an attempt by China to hedge bets.

Panda tweeted on Monday, "US missile defense capabilities, as they exist today, are not capable of completely nullifying China's retaliatory capability, but glider-FOBS (G-FOBS) is about hedging against possible advances in the future". He noted that both ground-based early-warning radars and space-based sensors deployed by the US were mostly facing towards the North Pole.

He argued, "generally speaking, the southern Pacific off the coast of South America is not an area that MDA/Space Force thinks about all too much."