More than 15,000 troops marched through Tiananmen Square on Tuesday 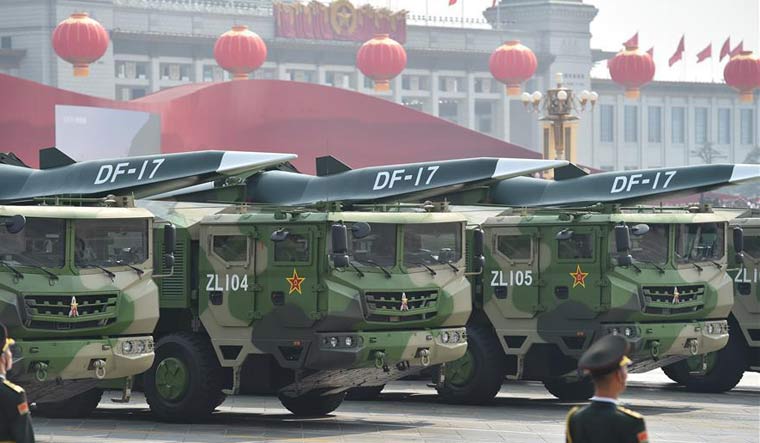 More than 15,000 troops marched through Tiananmen Square on Tuesday as the People's Republic of China marked 70 years of Communist rule.

Chinese President Xi Jinping gave a speech at the start of the National Day parade, which was used as an occasion to highlight the latest weapon systems Beijing had developed. Xi declared China would stay on the path of “peaceful development”, but added the People's Liberation Army would resolutely safeguard China's sovereignty and security. Among the new weapon systems on display were an upgraded version of a bomber sold by the Soviet Union to China in the late 1950s, hypersonic missiles and a variety of unmanned aerial vehicles.

Here, THE WEEK takes a look at some of these weapons:

A total of three H-6N bombers flew over the parade on Tuesday, carrying four cruise missiles each.

The H-6N is the latest iteration of the H-6 bomber, which was based on the Tu-16 bomber first sold by the Soviet Union to China in 1958. China has built over 150 H-6 bomber variants. While smaller than and having lesser range than the US Air Force's B-52 bombers, the H-6 has been progressively updated. Moreover, China has continued producing the H-6 bomber with multiple upgrades to engines and electronics.

The H-6N has an in-flight refuelling probe fitted to improve its range. Chinese engineers have also modified the H-6N by removing its internal weapons bay. The new H-6N is also touted as being able to carry a single anti-ship ballistic missile under the fuselage. The H-6N can carry up to six cruise missiles under its wings, which are thought to have an individual range of around 1,000km each.

The H-6N is expected to have a range of over 3,000km and experts have warned about its potential to target US military bases in Guam. In April, China deployed the H-6K, the predecessor to the H-6N, to Tibet, highlight the platform's ability to threaten targets in India.

The WZ-8 was mounted on a truck for the National Day parade. China's state-run Global Times reported the “drone is likely launched in the air via a bomber or transport aircraft”. According to Global Security.org, a US-based think tank, the WZ-8 was first test-flown in September 2015 and can reach high supersonic speeds.

GlobalSecurity.org claims the WZ-8 could be used to pick up data for targeting the DF-21 anti-ship ballistic missiles, which are touted as being able to hit aircraft carriers.

A total of 16 DF-41 transporter-erector-launchers with DF-41 missiles paraded through Tiananmen Square on Tuesday. The DF-41 is an intercontinental ballistic missile.

The Global Times claimed the DF-41 has a range of 14,000km and is the newest nuclear-armed ballistic missile for the Chinese military. The DF-41 can theoretically hit any part of the world and is also capable of carrying up to 10 multiple independently targetable reentry vehicle(MIRV) warheads. MIRV warheads separate after a ballistic missile re-enters the earth's atmosphere and head to separate targets, overwhelming ballistic missile defence systems.

The DF-17 ballistic missile, which is equipped hypersonic glide vehicle (HGV), was anticipated to be one of the stars of China's National Day parade. Hypersonic glide vehicles fly to their targets at speeds in excess of five times the speed of sound and are considered to be difficult to intercept by most air defence systems. China conducted two tests of the DF-17 HGV in 2017, with the weapon travelling about 1,400km in one test.

Unlike normal warheads on ballistic missiles that re-enter the atmosphere at a high altitude, hypersonic glide vehicles fly at a lower altitude and are difficult to detect by radar. US intelligence reports had claimed the DF-17 may be declared operational by 2020.