Apple says its ‘Polishing Cloth’ can clean any Apple display 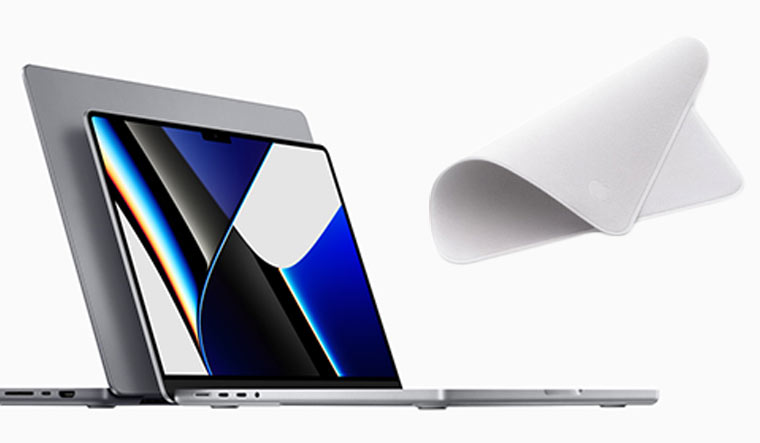 The new Macbook Pro 16" along with Apple's "Polishing Cloth"

The top-of-the-line Macbook Pro 16 will set you back around Rs 6 lakh, making this one of the costliest laptops on the market.

While the new 14 and 16 inch Macbook Pros start from Rs 1,94,900 and 2,39,900 respectively, maxing out their specs with higher capacity SSDs and the more powerful Apple M1 Max chip can more than double the price. The highest-spec Macbook pro 16, with an M1 Max chip with a 10-core CPU, 32-core GPU and 16-core Neural Engine, 64GB of RAM (which adds Rs 40,000 to the price), and an 8TB SSD drive (alone adding Rs 2.2 lakh) make the price tag a staggering Rs 5,89,900. Bundling a pre-installed installation of Final Cut Pro and Logic Pro pushes the laptop past the Rs 6 lakh mark.

Given the prestige value of having such an expensive gadget, you might want to keep it clean. Apple has a product for that too: A special “Polishing Cloth” retailing for Rs 1,900 (available for Rs 224 a month via EMI). “Made with soft, non-abrasive material, the Polishing Cloth cleans any Apple display, including nano-texture glass, safely and effectively,” reads the listing on Apple’s website.

The expensive cloth led to some fun on social media, reminscent of last year’s outrage over Apple charging $699 for a set of wheels for its Mac Pro computers.

Glad the Apple polishing cloth works with the 4th gen iPod shuffle… a device with no screen pic.twitter.com/Km7V9NPeHs

Adding to Apple’s flagship laptop roster are new 14 and 16-inch Macbook Pro models. The new Macbook Pros pack a 120Hz Liquid Retina XDR display, powered by M1 Pro and M1 Max chips (which Apple says is the world’s most powerful chip for a pro notebook). The performance bump over previous Macbooks is significant, with the Macbook Pro 14 said to be several times faster than the previous-generation high-end 13 inch model.

Both chips also add a ProRes accelerator in the media engine, which Apple claims will deliver uncompromisingly fast performance and video processing. As a result, professional video editors can edit up to 30 streams of 4K ProRes video, or up to seven streams of 8K ProRes video, in Final Cut Pro. And that’s not all. For the first time ever, video editors can now use their Mac to color-grade video in HDR on 8K ProRes 4444.

In terms of physical design, the updated MacBook Pro features an all-new aluminum enclosure and thermal design. The redesign adds an upgraded I/O as well, including a built-in HDMI and SDXC card slot. Even the Magsafe charger makes a comeback. According to Apple, the internal fans rarely need to turn on, making this one of the most quiet MacBooks to date. Wi-Fi 6 and Bluetooth 5.0 are both onboard. Battery life gets a notable boost, too. According to Apple, the 14-inch model delivers up to 17 hours of video playback, while the 16-inch model delivers up to a remarkable 21 hours of video playback.