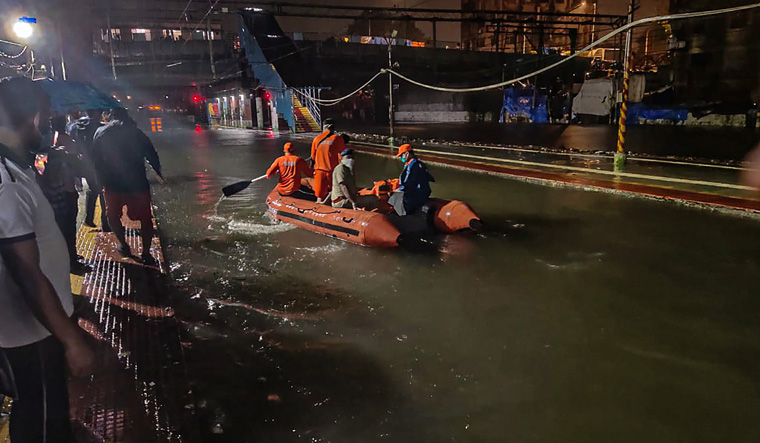 A report by the Intergovernmental Panel on Climate Change holds humankind unequivocally responsible for global warming and concludes that humans are ‘driving the planet into a permanently altered state’.

The report, released on Monday, titled Climate Change 2021: the Physical Science Basis, provides new estimates of the chances of crossing the global warming level of 1.5°C in the next decades, and finds that unless there are immediate, rapid and large-scale reductions in greenhouse gas emissions, limiting warming to close to 1.5°C or even 2°C will be beyond reach.

The major finding of the report is that governments needed to halve emissions by 2030 to give us the best chance of limiting temperature rise to 1.5℃. This means climate plans must be more ambitious than that and net zero roadmaps must put rapid emissions reduction at the heart of their plans.

Climate change is impacting every region of the world as evidenced by intensifying water cycles (more intense rainfall and associated flooding, as well as more intense drought in many regions), altered rainfall patterns; sea level rise that is causing more frequent and severe coastal flooding in low-lying areas and coastal erosion; the loss of seasonal snow cover, melting of glaciers and ice sheets; and marine heatwaves, ocean acidification and reduced oxygen levels.

All these are linked to human influence. These changes affect not just ecosystems but also the people that rely on them, and they will continue throughout at least the rest of this century.

This report contains a much improved understanding of how humans are unequivocally responsible for the climate changes we have observed since pre-industrial times. It concludes that our planet will continue to experience unprecedented change without drastic, deep emissions reduction. Globally, the planet will warm by 1.5°C in all scenarios. Even in the most ambitious emissions pathway, we will reach 1.5°C in the 2030s, overshoot to 1.6°C, before the temperature declines to 1.4°C at the end of the century.

India is currently the world’s fourth-largest greenhouse gas emitter (if the European Union is counted as one block), but per-capita emissions are much lower. The US emitted nearly 9 times more greenhouse gases per capita than India in 2018.

Latest climate science projections show increased precipitation and more frequent and severe hot extremes in India. Increase in rainfall will be more severe over southern parts of India. On the southwest coast, rainfall could increase by around 20 per cent, relative to 1850-1900. If temperatures go up by 4°C, India could see about a 40 per cent increase in precipitation annually. The main driver of hot extremes and heavy precipitation shall be human activities. Since the 1950s, human emissions have also increased the likelihood of ‘compound extreme events’, which is the term for when multiple extremes happen at the same time. For example, more heat can trigger more drought, or can lead to more wildfires.

India’s other major concern is air pollution. In 2019, air pollution claimed 1.67 million lives in the country. Approximately 74 per cent of low-income city workers in the nation are exposed to dangerously high levels of air pollution and the nation is home to 6 out of 10 of the world's most polluted cities. Strong and sustained reductions of methane emissions will be crucial to reducing global temperature rise and to improving air quality. As aerosols and methane live for a short time in the atmosphere, climate benefits will be seen very quickly if they are reduced.

Sea level rise will continue to rise over the 21st century: India with its 7,517km of coastline, will face significant threats from rising seas. Across six Indian port cities—Chennai, Kochi, Kolkata, Mumbai, Surat and Visakhapatnam—28.6 million people will be exposed to coastal flooding if sea levels rise 50cm. The assets exposed to flooding will be worth about $4 trillion.

Glaciers in the Hindu Kush Himalaya region are a crucial water supply for the 240 million people who live in the region, including 86 million Indians, roughly the equivalent of the country’s five biggest cities combined. Glaciers such as in the Lahaul-Spiti region of western Himalaya have been losing mass since the start of the 21st century, and if emissions do not fall, glaciers in the Hindu Kush Himalayas would decline by two-thirds.

Ajay Mathur, Director General, International Solar Alliance, said, ‘’The new IPCC report is far more stark and much more certain that climate change is a direct result of human-induced emissions. The global energy sector (power, heat and transport) accounts for around 73 per cent of our total emissions; it is also the engine behind every country’s economic and developmental plans. And so it becomes ever more important for us to be able to meet our growing energy needs without adding more CO2 to the atmosphere. Solar energy offers an ideal solution to all countries. The technology is ready and it is cost-effective; we need global collaboration to scale it up exponentially and expeditiously.‘’