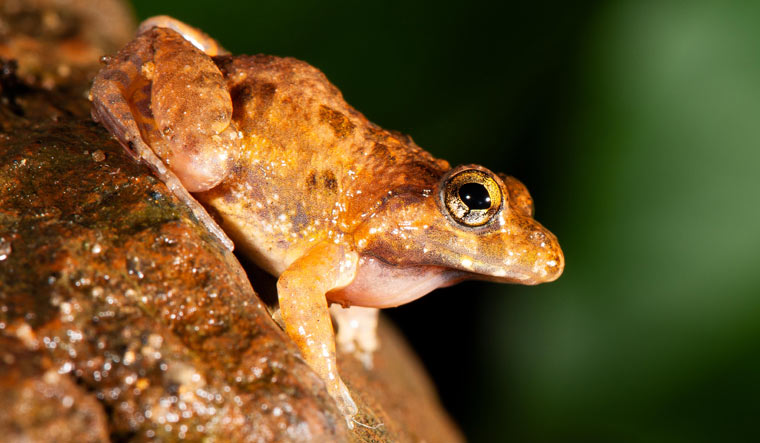 Researchers from the University of Delhi have named a newly discovered frog species from Western Ghats region after the former Vice Chancellor and renowned Indian Plant Geneticist Prof Deepak Pental.

University of Delhi researchers Professor S D Biju and Dr Sonali Garg on Monday said they have just discovered a new species of frog belonging to the family Dicroglossidae from the globally recognised Western Ghats biodiversity hotspot and it has been named as "Minervarya Pentali."

The discovery was made during a comprehensive study on a considerably large, common, yet a confusing group of Indian frogs genus Minervarya (common name: Minervaryan frogs), carried out over a period of nearly 10 years, they said in a release.

The new species was identified based on multiple criteria, such as external morphology, DNA and calling pattern.

The study has also resolved the identity and taxonomic status of all known members of the genus from Peninsular India, in addition to clarifying the geographical ranges of species and providing numerous new distribution records based on morphologically and genetically identified samples from a vast region.

The findings are published in a scientific article titled 'DNA Barcoding and Systematic Review of Minervaryan Frogs (Dicroglossidae: Minervarya) of Peninsular India: Resolution of a taxonomic conundrum with description of a new species' in the international journal Asian Herpetological Research.

"It is a great privilege to name a frog species after Prof Deepak Pental, the former Vice Chancellor of University of Delhi, in appreciation of his tremendous support and encouragement for setting-up of the Systematics Lab at University of Delhi where research leading to the discovery and description of nearly one-fourth of all known Indian amphibians has been carried out," says Prof Biju, under whose leadership the current study was published.

Biju established the Systematics Lab in 2006, and is the Head of the Department of Environmental Studies and former Dean of the Faculty of Science at University of Delhi.

The new species, named Minervarya Pentali, is endemic to the southern Western Ghats, the release said.

"We discovered it from wayside vegetation at multiple localities in Kerala and Tamil Nadu, while surveying amphibians during the monsoon season. This species is also among the smallest known Minervaryan frogs, which is probably one of the reasons it was overlooked until now," says Dr Garg, the lead author of the study and a postdoctoral researcher at University of Delhi.

This study and the authors were funded by University of Delhi; Department of Science and Technology, Government of India; Council for Scientific and Industrial Research, Government of India; Critical Ecosystem partnership Fund, USA and Global Wildlife Conservation, USA, the release said.PTI TGB SS PTI PTI 08021222