Aviation pioneer Wally Funk, 83 and Daemen, 18 will fly with Jeff Bezos to space 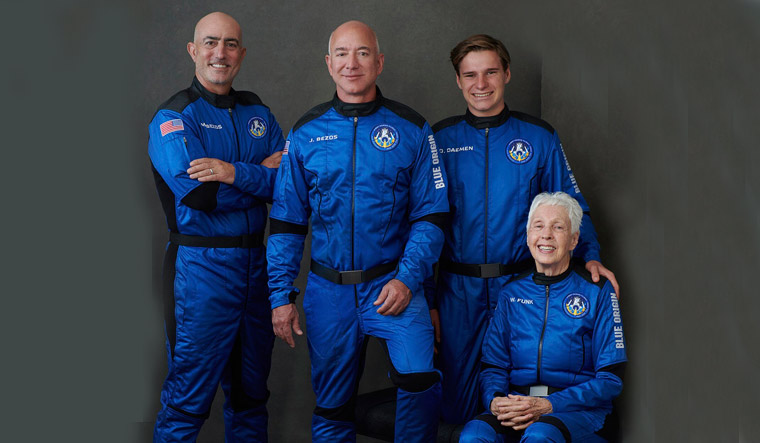 As Jeff Bezos is due to fly on an 11-minute voyage to the edge of space aboard his company Blue Origin's New Shepard rocket, he will be accompanied on the flight by his 53-year-old brother Mark Bezos, an 82-year-old former pilot, Wally Funk, and Oliver Daemen, 18. Mark Bezos, brother of Jeff Bezos will also be part of the crew.

Set to be the youngest person in space, Daemen was picked for the flight after a billionaire bidder who had won the spot on the first flight had to pull out a full days ago.

According to Blue Origin, Daemen took a year off after graduating from high school last year to obtain his private pilot's license. He'll attend the University of Utrecht in the Netherlands in September.

His father is Joes Daemen, founder and CEO of Somerset Capital Partners, a private equity firm in Oisterwijk, Netherlands. Both father and son are already in the US preparing for the launch, according to a company representative.

Wally Funk, aviation pioneer from Texas who had an illustrious career as a pilot and flight instructor will also soar on Blue Origin's first launch.

She was, is one of the members of the “Mercury 13”, a group of women who were considered eligible to travel to space but never got the chance to do so.

Funk, a member of the 'Mercury 13', was rejected for being women. 13 female pilots who went through the same studies in the early 1960s as NASA's Mercury 7.

Funk is the first civilian flight instructor at the Army's Fort Sill as well as the first female National Transportation Safety Board air safety investigator.

Blue Origin's Chief Executive Bob Smith said the next flight is likely in September or October. Smith said the "willingness to pay continues to be quite high" for people interested in future flights. More than 6,000 people from at least 143 countries entered an auction to become the first paying customer, though the auction winner who made a $28 million bid ultimately dropped out of Tuesday's flight.