2020 in space exploration: A year of firsts that shook up the global space order 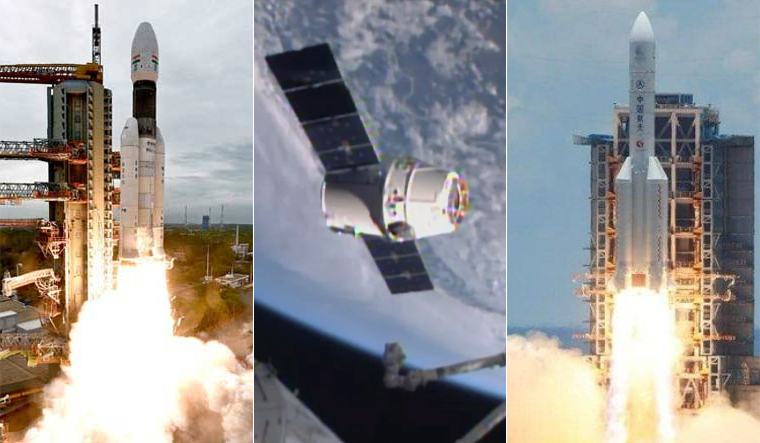 While a virus stopped the earth in its tracks for several weeks this year, it could not curb the thirst for exploring different worlds.

The year saw a record three near-simultaneous probes to Mars being launched this summer, all of them taking advantage of that brief window period when the two planets are closest to each other, thus shortening the journey. They will all reach the red planet in February 2021.

Each mission is remarkable in its own way. China's Tianwen-1 comprises an orbiter, lander and rover and hopes to be the Asian giant's first successful Martian rendezvous. The US, no stranger to Mars, has sent its Perseverance probe, a lander, and also the Ingenuity unmanned helicopter (which got its name from Indian-origin student Vaneeza Rupani). The probe hopes to collect a sample for a future return mission to earth, and the helicopter is the first attempt at powered flight outside of earth. Even the UAE, a newcomer to explorations, has sent its Hope probe, an orbiter, launched from Japan. Though low on scientific scope as compared to the other two missions, this one announces the debut of a new player in space, and if successful with an orbital entry, would be a historical feat.

So far, India holds the record for being the only country to have a successful first mission to Mars with its Mars Orbital Mission, which reached the Martian orbit in 2014, still operational.

China also landed its Chang'e probe on the moon on December 1. This probe has already scooped out lunar samples, packed them and relayed them back to earth. The consignment is expected to arrive by the end of this year itself.

Nasa's OSIRIS REx, on October 20, made a successful rendezvous with the asteroid Bennu and managed a successful sample collection weighing between 400 gm to 1 kg. The probe, which was launched in 2016, has been travelling through space to meet this distant celestial body, which was discovered in 1999, and has fascinated astronomers ever since. Unevolved and unchanged, this asteroid, believed to have been formed almost at the beginning of time, or at least the birth of the solar system should give scientists some idea of what our ancient origins were like. The sample should reach the earth by September 2023. Meanwhile, Hayabusa 2 brought home a consignment of samples from the Ryugu asteroid a few days ago, the scientists of JAXA, Japan's space agency, are busy unpacking this early Christmas gift even as we speak.

Roscosmos, Russia's space agency, meanwhile launched some regular rockets and continued to ferry passengers and crew to the ISS.

The year also saw another landmark in human space flights—the first private rocket to reach the International Space Station—courtesy SpaceX. The company's Crew Dragon spacecraft took two NASA astronauts to the ISS on May 31, the first human space flight to take off from American soil since 2011. 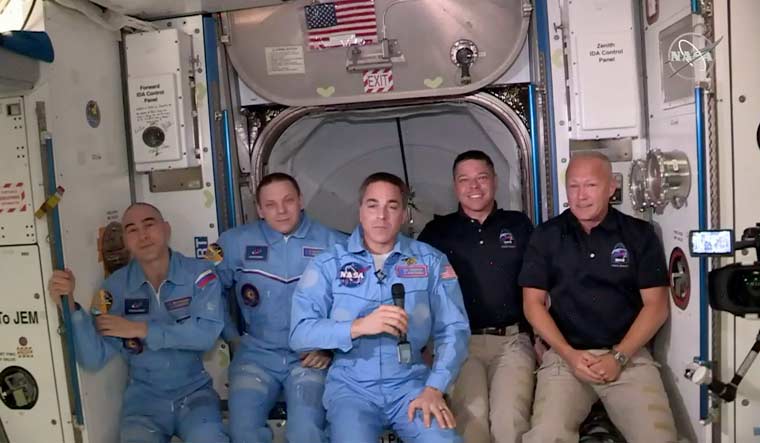 This photo provided by NASA shows Bob Behnken and Doug Hurley, far right, joining the crew at the International Space Station, after the SpaceX Dragon capsule pulled up to the station and docked Sunday, May 31, 2020 | NASA via AP

A few days ago, the US announced its space policy, which emphasizes setting up habitable settlements on the moon, and then looking towards landing humans on Mars. NASA also released the names of 18 astronauts, men and women, who will be part of the country's Artemis return to the moon mission.

India, too, made a series of announcements this year, as prime minister Narendra Modi announced opening up the space sector to private players as part of Atmanirbhar Bharat. Unfortunately, there wasn't much excitement in Indian Space Research Organisation (ISRO), in what was supposed to be a busy year, with the first of the three Gaganyaan flights to be launched this December. The lockdown, and worse, later the infection itself, however, crippled work at ISRO's various centres; the belt-tightening having further impacted the organisation. Gaganyaan has slipped into 2021, as has the solar probe, Aditya. Sources say the datelines of other missions, too, will be adversely hit. India was working on Chandrayaan-3, another rendezvous to the moon, with a launch in 2021. Exploring Venus was also somewhere on the distant horizon.

The blow to Gaganyaan is big, given the scale of the ambition, and the hope to see Indians in orbit, onboard a Made in India capsule, in 2022, the 75th anniversary of the birth of modern India. While officials still hope to make the third flight in time for the landmark anniversary, the odds are stacking up against it.

India will barely manage to have two regular launches from Sriharikota this year. The first was in November, with the successful launch of the country's first Earth Observation Satellite onboard a PSLV rocket. Along with it, nine other satellites were launched. On December 17, the PSLV-XL launched a communication satellite, CMS-01, as its payload. Early in the year, it had also launched a satellite from French Guiana.