Amid rare travel window, the US, China and UAE all have spacecraft enroute to Mars 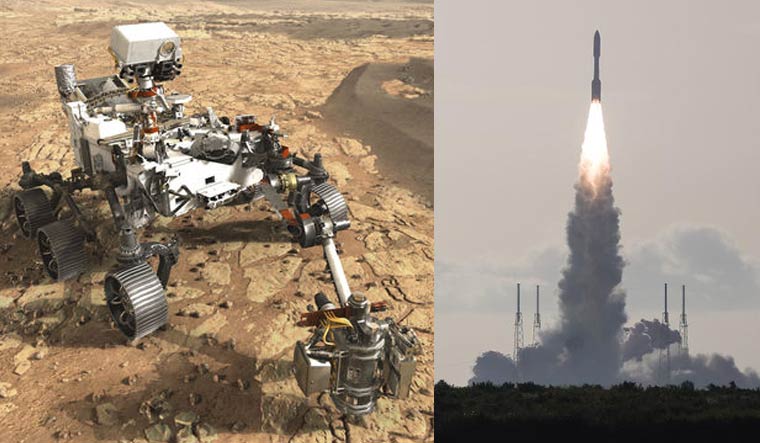 The rover that will be deployed on Mars (L), the launch of the Atlas V rocket taking it to Mars | NASA

The biggest, most sophisticated Mars rover ever built—a car-size vehicle bristling with cameras, microphones, drills and lasers—blasted off for the red planet Thursday as part of an ambitious, long-range project to bring the first Martian rock samples back to Earth to be analyzed for evidence of ancient life.

NASA's Perseverance rode a mighty Atlas V rocket into a clear morning sky in the world's third and final Mars launch of the summer. China and the United Arab Emirates got a head start last week, but all three missions should reach their destination in February after a journey of seven months and 300 million miles (480 million kilometres).

The plutonium-powered, six-wheeled rover will drill down and collect tiny geological specimens that will be brought home in about 2031 in a sort of interplanetary relay race involving multiple spacecraft and countries. The overall cost: more than USD 8 billion.

NASA's science mission chief, Thomas Zurbuchen, pronounced the launch the start of “humanity's first round trip to another planet.” “Oh, I loved it, punching a hole in the sky, right? Getting off the cosmic shore of our Earth, wading out there in the cosmic ocean," he said. “Every time, it gets me.”

In addition to addressing the life-on-Mars question, the mission will yield lessons that could pave the way for the arrival of astronauts as early as the 2030s.

“There's a reason we call the robot Perseverance. Because going to Mars is hard,” NASA Administrator Jim Bridenstine said just before liftoff. “It is always hard. It's never been easy. In this case, it's harder than ever before because we're doing it in the midst of a pandemic.”

The U.S., the only country to safely put a spacecraft on Mars, is seeking its ninth successful landing on the planet, which has proved to be the Bermuda Triangle of space exploration, with more than half of the world's missions there burning up, crashing or otherwise ending in failure.

China is sending both a rover an orbiter.

The UAE, a newcomer to outer space, also has an orbiter en route.

It's the biggest stampede to Mars in spacefaring history. The opportunity to fly between Earth and Mars comes around only once every 26 months when the planets are on the same side of the sun and about as close as they can get.

Launch controllers wore masks and sat spaced apart at the Cape Canaveral control center because of the coronavirus outbreak, which kept hundreds of scientists and other team members away from Perseverance's liftoff.