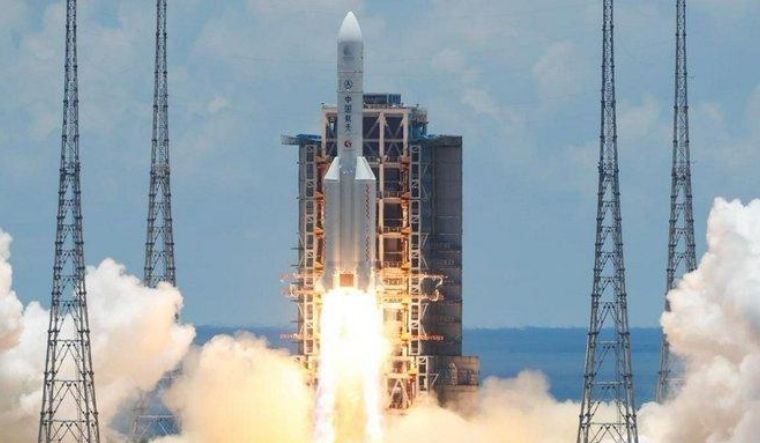 China successfully launched its first Mars probe on Thursday from the Wenchang Spacecraft Launch Site in the southern island province of Hainan, official media here reported. About 36 minutes after the Mars probe was launched, the spacecraft, including an orbiter and a rover, was sent into the Earth-Mars transfer orbit, according to the China National Space Administration (CNSA).

The Chinese Mars probe named Tianwen 1, or Quest for Heavenly Truth 1, will fulfil three scientific objectives: orbiting the red planet for comprehensive observation, landing on Martian soil and sending a rover to roam the landing site.

The Long March 5 rocket, the nation's biggest and most powerful, will transport the robotic probe to the Earth-Mars transfer trajectory before the spacecraft begins its self-propelled flight toward Mars' gravity field.

According to China Aerospace Science and Technology Corp, a State-owned space conglomerate, the probe will travel for about seven months before it reaches Mars, which at the farthest point of its orbit is about 400 million kilometres from Earth and 55 million kilometres at the nearest point.

It said the probe consists of three parts—the orbiter, the lander and the rover—and they will separate in Mars orbit. The orbiter will remain in the orbit for scientific operations and to relay signals while the lander-rover combination makes an autonomous descent and landing.

The rover has six wheels and four solar panels and carries six scientific instruments. It weighs over 200 kilogrammes and will work for about three months on the planet, designers said.

China aims to catch up with India, the US, Russia and the EU to reach the red planet.

China in recent years has emerged as a major space power with manned space missions and landing a rover in the dark side of the moon. It is currently building a space station of its own.

China's previous attempt to send an exploratory probe to Mars called Yinghuo-1, in a Russian spacecraft in 2011 failed as shortly after the launch it was declared lost and later burnt during re-entry.

The US, Russia, India and the EU have succeeded in sending missions to Mars regarded as the most complex space mission. India became the first Asian country to have successfully launched its Mars orbiter mission Mangalyaan which entered the orbit of the red planet in 2014.

India also became the first country to have entered the Martian orbit in its first attempt.

China's Mars probe is the second such mission launched this month. A United Arab Emirates spacecraft to go to Mars was launched from Japan on July 20, in what is the Arab world's first interplanetary mission.

The launch of the spacecraft named Amal, or the 'Hope Probe', marks the start of the seven-month journey to the red planet. NASA Perseverance rover is due to lift off on July 30.