Dinos may have regulated their own body temperatures: Study 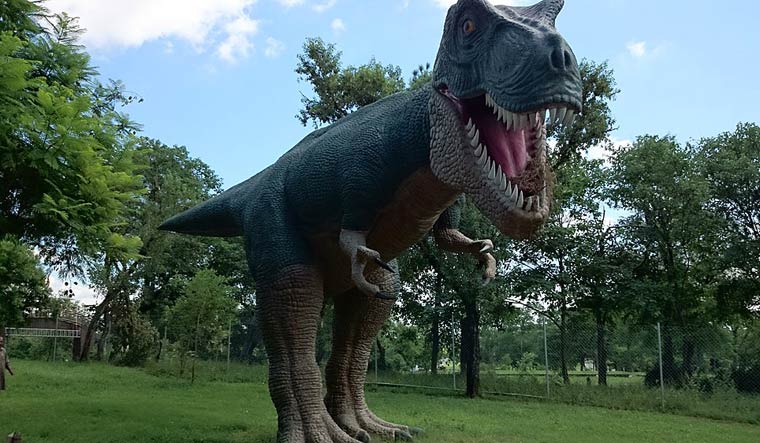 Dinosaurs may have evolved from lizard-like cold-blooded characteristics to warm-blooded traits, eventually regulating body temperatures with their own metabolism as opposed to relying on the sun's heat for warmth, according to a first-of-its-kind study.

The research, published in the journal Science Advances, analysed chemical bonds in the compound calcium carbonate -- which is present in dinosaur egg shells -- to calculate the temperature at which these minerals formed, and also the body temperature of the mother who laid the egg.

Applying this method to fossil eggs from three distinct dinosaur species ranging in history from the time of evolution of the first reptiles to that of the early birds, the scientists found that the body temperature of dinosaurs may have ranged from 35-40 degrees Celsius.

"The global climate during the dinosaur era was significantly warmer than it is today. For this reason, measuring only the body temperatures of dinosaurs who lived near the equator wouldn't tell us whether they were endo- or exothermic because their body temperature may simply have been a cold-blooded response to the hot climates they lived in," said study co-author Hagit Affek from the Hebrew University of Jerusalem in Israel.

In order to ensure that the body temperatures estimated by the scientists were the result of an internal, metabolic heating process, and not reflecting the climate around the dinosaurs, Affek and her team focused on the ancient reptiles that lived in high latitudes like Alberta in Canada.

By studying mollusc shells that lived alongside the dinosaurs in Alberta, the researchers determined the ambient climate of the time.

This was because these shelled creatures depended on the environment for regulating their body temperature, the study noted.

The mollusks' body temperature measured 26 degree Celsius, revealing that the dinosaurs living in Alberta regulated their own body heat—since they may not have maintained a temperature of 35-40 degree Celsius in such an environment otherwise, the scientists explained.

"We believe that this transformation happened very early on in dinosaurs' evolution since the Mayasaura eggs—a lizard-like dinosaur species that we tested—were already able to self-regulate their body temperature, just like their warm-blooded, bird-like cousins, the Torrdons," Affek said.

Since both the species, located at opposite ends of the dinosaur evolutionary tree, had body temperatures higher than those of their environment, both may have had the ability to warm themselves, the researchers said.