Sivan was instrumental in the success of ISRO's most challenging missions 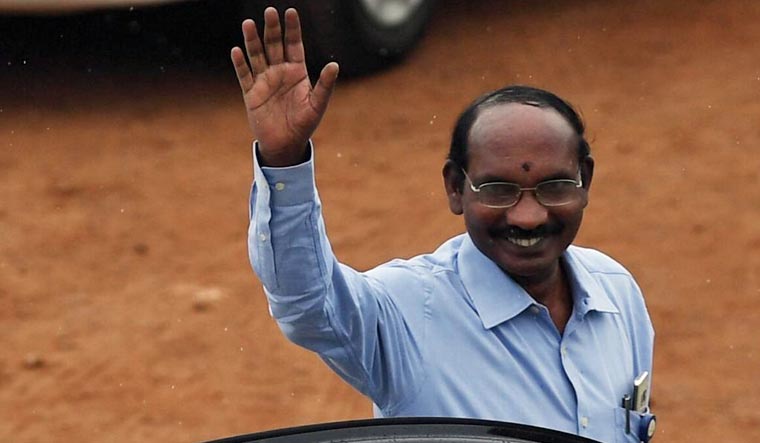 ISRO Chairman K. Sivan greets people gathered at the spectators' gallery before the launch of Chandrayaan-2 at Sriharikota in Andhra Pradesh, on Monday | Bhanu Prakash Chandra

As Chandrayaan-2 took off, ISRO chief K. Sivan broke into a smile and accepted greetings from his seniors and colleagues at the Mission Control Centre in Sriharikota. Then, on a high note, he thanked his colleagues by first acknowledging the work done by the most invisible men and women in the team—engineers, technicians and support staff—who worked tirelessly, forgetting their families and personal lives, to fix the technical snag which had led to the cancellation of the first launch. A technocrat through and through, Sivan knows how important the work of engineers and technicians are.

Sivan, who built his career from very humble origins, as the son of a farmer in Kanyakumari, Tamil Nadu, has never let go of his beginnings. He knows what hard work can achieve and it was only hard work that landed him in prestigious colleges without any coaching and tuition.

Sivan is more popularly known as the 'Rocket Man' for the effort he had put into developing India's cryogenic engine. This had become a necessity in the wake of the sanctions imposed on India after Pokhran II nuclear tests.

Before the elevation to the space agency's top post, Sivan was the director of the Vikram Sarabhai Space Centre (VSSC) in Thiruvananthapuram, where he helped achieve some of the big ticket successes in recent launches. For instance, he was the one who was instrumental in suggesting how to stack up 104 satellites for the record breaking launch ISRO had accomplished in February 2017.

Sivan has worked with most of the space projects that are being talked about these days. Though he joined the ISRO in the PSLV programme, he worked with the GSLV rocket—the naughty boy of the stable—which has now proved its worth. Sivan also worked on the reusable launch vehicle, a technology the ISRO is developing and testing these days. He was also closely associated with making the Mars Orbiter Mission satellite fly atop the slender PSLV rocket, India's only reliable vehicle those days. He had also co-authored the book Integrated Design for Space Transportation.

A thorough rocket scientist, Sivan isn't too much of a communicator. He, however, knows how to connect with the masses instantly as was evident on Monday, when he visited the spectators' gallery before the launch, assuring the gathering that the rocket would fly today.

Sivan is a champion of frugal science and technology. His humble beginnings must have given him an appreciation of thrift, without compromising on quality. He believes India's future in space technology is great and that its speciality is low cost launches and missions.

Sivan has not had a very easy tenure and success has come peppered with failures, and controversy. His first flight after becoming the chairman was a failure, as the heat shield of the satellite failed to open, trapping it within. This was the first PSLV failure in 24 years. Sivan accepted it with the stoicism he has developed and moved on to other work.

For a workaholic he is, at the VSSC, he had earned the moniker of “Sleepless Scientist” for the hours he had put in at work.

Earlier this year, Sivan was also faced with a barrage of queries about militarisation of space but he kept a studied silence. However, in an interview with this reporter, Sivan once said that ISRO's role in the anti-satellite test mission was only of providing a satellite. "I am a businessman. If anyone wants to buy from me a satellite that is not in use, why will I say no," he had said.