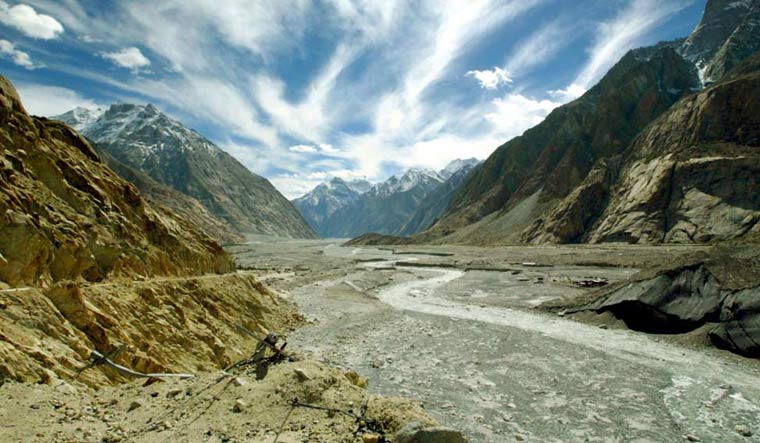 Glaciers become the largest supplier of water to some of Asia's major river basins during droughts, fulfilling the basic needs of 221 million people when water shortages are at their worst, a study has found.

The study, published in journal Nature, has important economic and social implications for a region that is vulnerable to drought. Climate change is causing most of the region's glaciers to shrink.

Hamish Pritchard, a glaciologist at the British Antarctic Survey (BAS) in the UK, said that the melt-water is important for the people living downstream when the rains fail and water shortages are at their worst.

According to researchers, each summer, glaciers release 36 cubic kilometres of water—equivalent to 14 million Olympic swimming pools—to these rivers. This is enough water to cater to the needs of 221 million people.

The high-mountain region of Asia, known as the Third Pole, including the Himalayas, has 95,000 glaciers in total. About 800 million people are partly dependent on their melt-water.

However, this supply is unsustainable because climate change is causing the region's glaciers to lose 1.6 times more water than they gain each year from new snowfall.

Researchers analysed estimates of the glacier contribution with the amount of precipitation in average years and in drought years.

They used climate datasets and hydrological modelling to calculate the volume of glacier water entering and leaving the region's major river basins.

"Even in high-mountain Asia, they are remote and cover quite a small part of the region. It turns out that they are particularly valuable to society as a natural store of water that keeps the rivers flowing through summer, even through long droughts," Pritchard said.

Against a background of increasing drought-related water and food shortages and malnutrition, which have been predicted with high confidence for the coming decades, Pritchard said that Asia's glaciers will play an increasingly important part in protecting downstream populations from drought-induced spikes in water stress.