Katie Bouman and the fallacy of the ‘lone genius’ narrative

How internet trolls missed the point of the black hole photograph 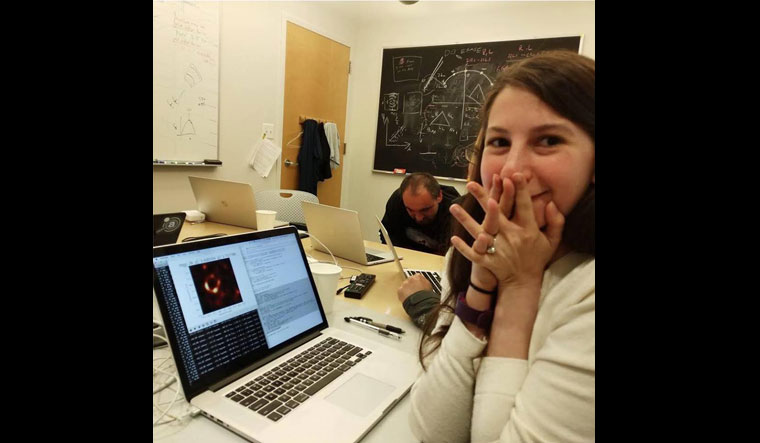 Women in the scientific community often struggle to get due recognition for their work. Renowned figures in science from Annie Jump Cannon to Mary Jackson, Antonia Maury and Katherine Johnson, all had to wait decades to get due credit for their work.

While times have changed to a degree, sexism still pervades discussions about science, and the latest target is Katie Bouman.

Bouman was one of the key contributors within the Event Horizon Telescope (EHT) team that made the first-ever photograph of a black hole. An image of her smiling in excitement while her algorithm processed the image went viral shortly after the announcement.

For many, it was a harmless photograph of a scientist seeing the fruits of many years of labour come alive on a screen. But for internet trolls, it led down a rabbithole of sexist speculation and the fallacy of the “lone genius” theory.

In truth, scientific accomplishments, contemporary ones at least, are mostly the works of a scientific community involving several researchers and not just one. However, the significant media coverage that Bouman received made her out as the ‘lone genius’ behind the accomplishment—a charge she frequently refuted, calling the achievement a team effort.

Internet trolls were quick to strike while the iron was hot and attacked her for stealing the ‘undeserved’ spotlight. Bouman was forced to justify her contributions to the scientific breakthrough, a task not imposed on her male peers.

For an audience that usually enjoys ‘lone genius’ narratives and accepts them without question, it is significant to note the high amount of scepticism that ensued regarding Bouman’s feat. Her credibility as a scientist was questioned and attempts were made to turn her success story into an undeserving attempt at fame, one that was wrongly popularised in the name of feminism.

To further the narrative that Bouman stole all the credit, internet trolls found a name to fit their narrative—Andrew Chael.

Andrew Chael and Katie Bouman were part of the same team, tasked with testing the accuracy of the data obtained by the EHT. On finding Chael's name, trolls dug through his GitHub repository (a public platform for contributions made by programmers towards a software project) in hopes of finding a narrative that could make Bouman a fame-thief. After going over his contributions towards an application used to process the image, they spread a rumour—that Chael had made 850,000 commits to this repository while Bouman had only made 2,400. 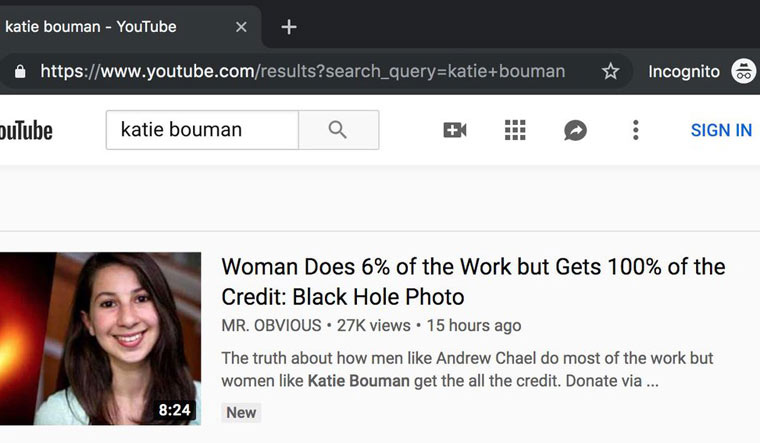 Before venturing further, one must acknowledge that Chael’s contributions were no ordinary matter. However, his name was used to downplay Bouman’s accomplishment in what seems to be a dirty game of gender politics. The truth is that there are four teams involved in the project, each trying to verify the data.

This is where Bouman comes in. Her algorithm, CHIRP (Continuous High-Resolution Image Reconstruction using Patch priors), helps to separate the black hole data from the rest of information collection by the EHT.

This data could then be converted to the images later used to form the black hole photograph. An algorithm developed by a scientist named Mareki Honma was then used to form a composite image. Honma is the other scientist that trolls accuse Bouman of stealing credit from. When they found out about Honma’s algortithm, they assumed Bouman stole his credit as well. This is how the narrative of a woman stealing credit from men was created.

GitHub commits are meaningless without context. While, a major portion of Chael’s commits are his contributions, he has also asserted that many were by his colleagues. He personally tweeted that Bouman was a “huge contributor” to the project, which would “have never worked” without her.

These are Andrew Chael and Mareki Honma. Mareki invented the algorithm used in the stitching of the black hole images and Andrew wrote most of the code. Nobody talks about them because they're males. pic.twitter.com/SlPkBkfGYf

In fact, it was Chael who took the viral photo of Bouman next to the black hole image, as he did not want history to neglect her contributions.

(2/7) Our papers used three independent imaging software libraries (including one developed by my friend @sparse_k). While I wrote much of the code for one of these pipelines, Katie was a huge contributor to the software; it would have never worked without her contributions and

Thus, while the ‘lone genius’ narrative isn’t necessarily true, Bouman’s algorithm was crucial towards creating the first-ever image of a black hole.

(1/7) So apparently some (I hope very few) people online are using the fact that I am the primary developer of the eht-imaging software library (https://t.co/n7djw1r9hY) to launch awful and sexist attacks on my colleague and friend Katie Bouman. Stop.

Bouman herself acknowledges the role of her team, saying in a Facebook post that “no one algorithm or person made this”.

However, the trolls had their own narrative to spin, regardless of what the actual scientists who worked on the project had to say. Fake Twitter and Instagram pages proliferated, along with belittling memes and videos.

Bouman's Wikipedia article, in particular, faced several attempts at deletion. Vandals continuously tried to edit the page in a desperate attempt to degrade her legacy. After hundreds of edits were made and unmade, her page was assigned 'semi-protected' status, to put an end to the madness.

The methods were varied. Some users tried to discredit her work by writing that CHIRP (her algorithm) wasn’t used to create the image. Others tried to incorporate irrelevant information about her, along the lines of invalidating her as a ‘woman’. One user kept adamantly re-editing her article to mention that she is childless.

Bouman is not the first woman to have her historic moment marred by sexism. Over the years, several women who have made their mark in advancing human scientific understanding have often found themselves relegated to the margins. In the Smithsonian National Air and Space Museum in Washington, D.C., there were only two walls dedicated to women in 2016—one was styled in pink with photos of female aviation pioneers, and the other was dedicated to the sexist guidelines issued for flight attendants in the 1950s.

There is no better sign that the times have changed in the world of STEM, than the fact that a woman and a gay man are two of the most-applauded figures in the wake of this historic finding. Bouman and Chael's incredible achievement is a leap forward, not just for marginalised communities in STEM, but for mankind as a whole.