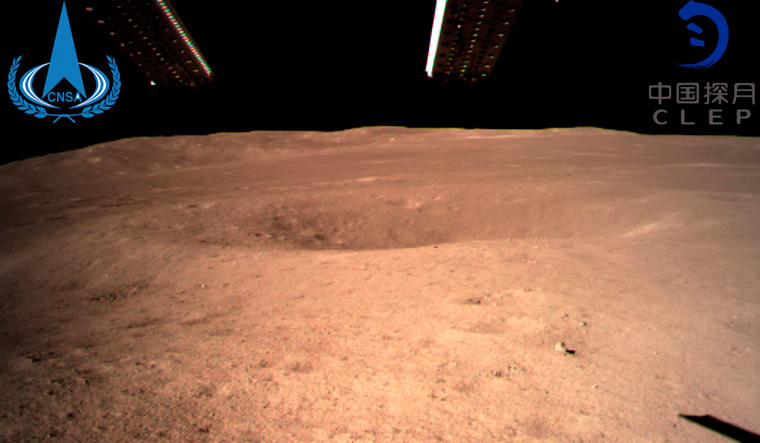 A photo provided on January 3, 2019, by China National Space Administration via Xinhua News Agency, the first image of the moon's far side taken by China's Chang'e-4 probe | via AP

A cotton seedling that sprouted on the moon has been left to die as China's historic lunar lander continues a freezing night-time nap that will last as long as two earth weeks, scientists said.

The Chinese space agency announced earlier this week that the seed had germinated inside a special canister aboard the Chang'e-4 probe, after the spacecraft on January 3 made the first-ever landing on the far side of the moon.

The mini biosphere—which operated for over 212 hours—was shut down as planned on Saturday, said Chongqing University, which designed the experiment.

The lander also carried potato and arabidopsis seeds—a plant of the mustard family—as well as fruit fly eggs and yeast.

Temperatures inside the ecosystem were expected to plunge below minus 52 degrees Celsius (minus 61.6 degrees Fahrenheit), and the organisms will be "in a frozen state", the university said in a statement on Tuesday.

The experiment ended hours before Chang'e-4 entered "sleep mode" on Sunday as the first lunar night fell since the probe's landing. Temperatures plummet to about minus 170 degrees Celsius (minus 274 degrees Fahrenheit).

A lunar night lasts for about two earth weeks, after which the probe is expected to wake up, the statement said.

"Life in the canister would not survive the lunar night," Xie Gengxin, who led the design of the experiment, told the official Xinhua news agency.

Once the temperatures start to rise next month, the organisms will be allowed to "slowly decompose" in the permanently sealed canister.

Chang'e-4 is also equipped with instruments developed by scientists from Sweden, Germany and China to study the lunar environment, cosmic radiation and the interaction between solar wind and the moon's surface.

The lander released a rover, dubbed Yutu-2 (Jade Rabbit), that will perform experiments in the Von Karman Crater.

China's space agency said it is planning four more lunar missions, confirming the launch of a probe by the end of the year to bring back samples from the moon.

Beijing wants to establish a lunar research base one day, possibly using 3D printing technology to build facilities, the agency said on Monday.