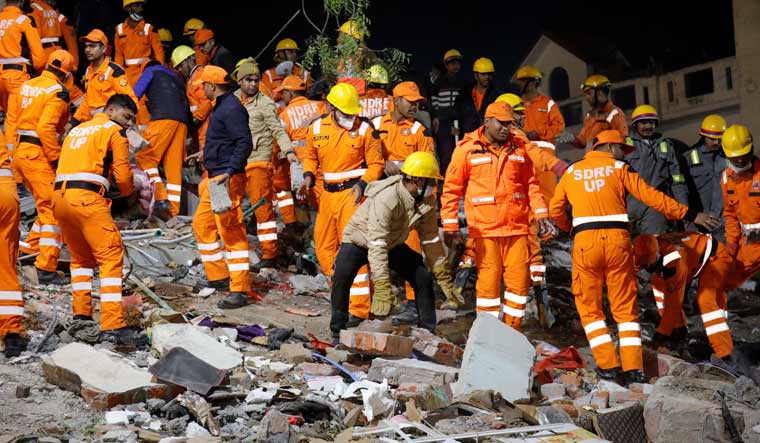 Uttar Pradesh Chief Minister Yogi Adityanath has ordered the formation of a three-member investigation committee which will submit its report within a week, on the causes and the people responsible for the building collapse in Lucknow on Tuesday evening.

After a night of rescue operations, in which 15 people were pulled out, the Commissioner of Lucknow has also ordered an inspection of all buildings which have been constructed by the builder in question.

The investigation committee set up by the CM is to consist of Roshan Jacob, the Commissioner of Lucknow; Piyush Mardia, Joint Commissioner of Police and the chief engineer of the Public Works Department.

At the time of the filing of this report, two people were still trapped inside the building on Prag Narain Road. This is not far from the capital’s Butler Palace Colony where ministers, bureaucrats and senior journalists are housed. Two people have died in the accident, one elderly lady died after being rescued.

The rescue teams are in touch with those who are still trapped and oxygen is being supplied to them.

The building in question—Alaya Apartments—was constructed by Yazdan Builders. The building is registered in the name of Nawazish Mansoor, the son of a Samajwadi Party MLA Shahid Mansoor. The MLA represents Kithore constituency in Meerut district. The younger Mansoor has been picked up by the police in Meerut and is on his way to Lucknow for questioning.

On an advertising platform, the construction company describes itself as ‘a leading player in Lucknow real estate industry'.

Around 7 pm on Tuesday, the barely 12-13-year-old building came down. There are various theories about why that happened. One is that the earthquake tremors during the day brought it down; another is that heavy construction work in the basement had weakened its foundation. Some are speculating that the building developed cracks when a nearby building was demolished.

There is, however, a deeper rot that is in place in the city’s development authority which oversees the quality of construction. Complaints against illegal and shoddy construction being permitted in the respective zones that engineers oversee have been made- even up to the level of the CM but no action has been taken.