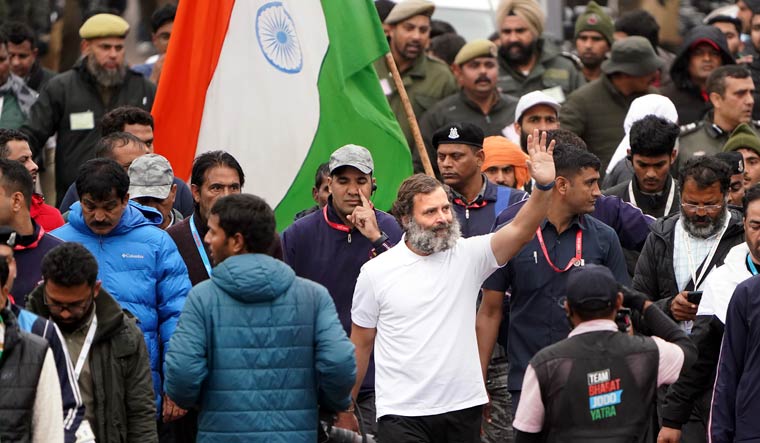 Amid incessant rains, senior Congress leader Rahul Gandhi resumed his Bharat Jodo Yatra from Ramban Wednesday and is heading for the highway town of Banihal.

The journey from Ramban to Banihal along the 270-km Jammu-Srinagar national highway - the only all-weather road linking Kashmir with rest of the country -- is the most challenging due to several problematic stretches, including Panthiyal, Mehar and Magerkote which are prone to shooting of stones from the hillocks overlooking the arterial road.

Traffic on the highway was suspended Wednesday morning after heavy rains triggered the shooting of stones at a few places in Ramban district that left a truck driver dead and two others injured.

J-K Pradesh Congress Committee spokesperson Jahanzaib Sirwal said the yatra resumed around 9 am from Bathi after an hour-long delay due to heavy rains and was progressing smoothly on day 131, covering the old alignment road via Maitra in Ramban town.

Gandhi, who started the yatra wearing his trademark white T-shirt, later donned a black raincoat. Enthusiastic Congress workers and supporters carrying the tricolour turned up in large numbers despite the rains to receive the Gandhi family scion.

Jammu and Kashmir Congress Chief Vikar Rasool Wani, who hails from Banihal and represented the assembly constituency twice in the past two elections, was seen moving alongside Gandhi and introducing him to various delegations as they cover the five-km stretch.

A few inches of snowfall had accumulated at the Lamber camping station, while Banihal was lashed by incessant rains overnight. The weather office has forecast heavy snowfall over middle and higher reaches and rains in plains during the day.

The yatra started from Kanyakumari on September 7 and entered Jammu and Kashmir via Punjab on Thursday. After a daybreak in Banihal where Gandhi is likely to celebrate Republic Day and hoist the national flag to mark the occasion, the yatra will leave for Kashmir on January 27 morning.

The march will culminate with Gandhi unfurling the national flag at party headquarters in Srinagar and addressing a grand rally at the Sher-e-Kashmir Cricket Stadium on January 30.