We trust our Army, said Rahul while addressing a press conference in Jammu 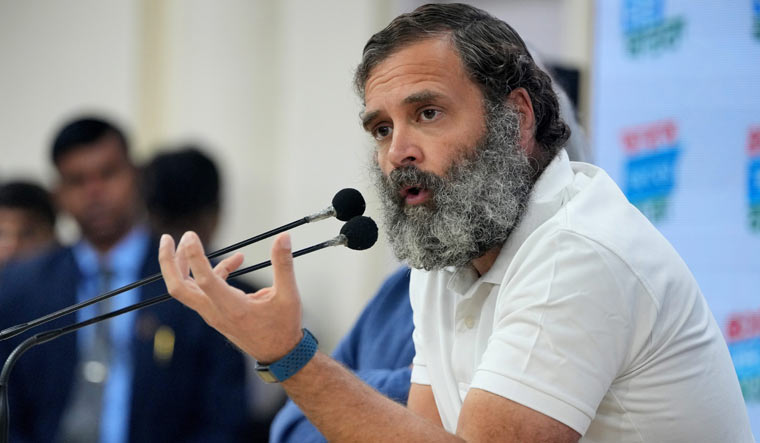 Congress leader Rahul Gandhi on Tuesday said that they trust the Army and there is no need for the armed forces to give proof of their actions.

While addressing a press conference in Jammu, on being asked the party's stand on senior leader Digvijaya Singh's statement questioning the surgical strikes, Gandhi had said that “We don't appreciate his (Digvijaya Singh) personal views.

“We trust our army. What army does there is no need for any proof,’’ he said.

Senior leader Digviyaya Singh had said that there was no proof of surgical strikes carried out by the army in Pakistan occupied Kashmir.

Rahul said the Congress is a democratic party and the party stand is above his views. His views are not held by the party, he added.

“The armed forces do a job and they don’t need to give proof,’’ he said.

He also said that it is the culture of our party to allow a conversation.

“There is no such thing in the BJP, like the case of demonetisation which the Prime Minister decided we are going to do and it happened,’’ he said.

Replying to a question about the ban on the BBC documentary on Gujarat riots, he said if you read the scriptures it is clearly written that the truth cannot be hidden.

On being asked if the purpose of the yatra was to spread love then why was he constantly targeting the BJP, Gandhi said that the Congress is a political party and some talk will happen during it as they meet the people and listen to their issues.

“We met the Kashmiri Pandits delegation and they said Lieutenant Governor is abusing them and the government is being forced to go back to Kashmir. How can I not talk about that?’’ he asked. “If we don’t do that then people will say they are not talking about our issues.”

He said the Kashmiri Pandits told him that whatever was done for them was done by Manmohan Singh during his tenure as Prime Minister.

“They said the BJP is using them politically and are forcibly trying to send for dying in Kashmir.”

He said the Yatra has been successful in its mission of spreading love and countering hate spread by the BJP and the RSS. “The purpose of the Yatra is not to counter hate and spread love.” He said today wealth of the country is monopolised by a select few which is a problem for the country.

On asked whether they have worked a follow-up plan after the Yatra, he said until they complete the Yatra in Srinagar, they will not undertake anything as it will lose focus.

Also, on asked why Chaudhary Lal Singh and others including Ghulam Nabi Azad were not invited to the Yatra if its mission is to carry everybody along, he said Chaudhary supported the yatra and they appreciate that.