Yogi pushes for Ayodhya in 2047; says there is 'no paucity of funds'

Many small vendors and shop owners are unhappy about being evicted 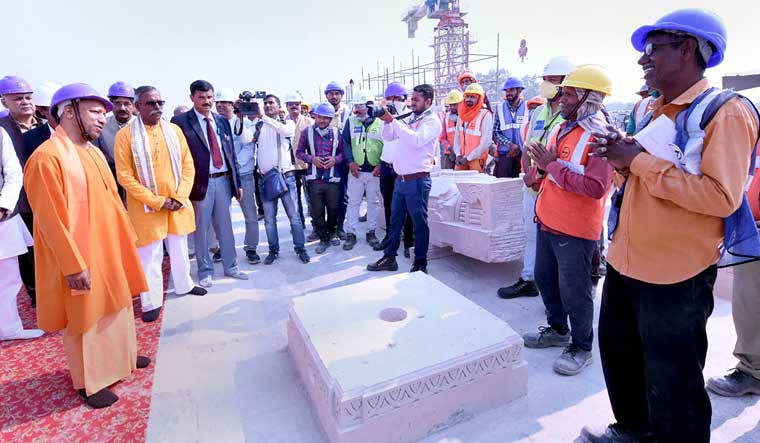 Uttar Pradesh Chief Minister Yogi Adityanath during his visit to inspect the construction works of Ram Janmabhoomi Temple, in Ayodhya on Sunday | PTI

Another Rs 1,057 crores were pumped into Ayodhya on Sunday as part of Uttar Pradesh Chief Minister, Yogi Adityanath’s vision for the holy city in 2047.

"With the double engine of growth, there is no paucity of funds for Ayodhya", Adityanath said in a meeting of prominent citizens from all walks of life in a day-long stock-taking exercise that ended on Sunday night.

The new Ayodhya will be connected with two, four and six-lane highways from all sides. While there is already a 24-hour electricity supply, as the Chief Minister claimed, all overhead hanging wires which are an eyesore shall be removed. There will be an integrated traffic management system, the city will be safe, it will have good railway stations and wide roads; while mandis and convention centres will also be constructed.

Not everyone is, however, enamoured by the way the development is unfolding. Small vendors- including those who sell flowers, sweets, incense sticks, memorabilia and the like -have had their shops shuttered awaiting demolition. On the narrow lanes that lead to Hanumangarhi- the hillock on which rests the temple of Hanuman- the guardian God of Ayodhya, these vendors have earned their livelihood for generations. Now they are unhappy at the paltry compensation being offered to them. Alternative sites offered to them are nowhere near the existing or upcoming temple complex, thus like a death knell for their livelihoods.

On November 27, while Adityanath extolled the virtues of a modern Ayodhya, traders and shop owners downed their shutters and declared an indefinite closure. Some trader leaders were asked to stay in their homes by the police. The protestors also raised slogans against the bulldozers that will pave the way for the widening of roads.

One shop owner said, "The government has given no thought to us. Even its own promises- such as having all roads without potholes have not been fulfilled."

November 15 was the deadline given by the government for gaddha mukt (pothole-free) roads.