BJP spends crores to distort my image; but it is beneficial to me, says Rahul 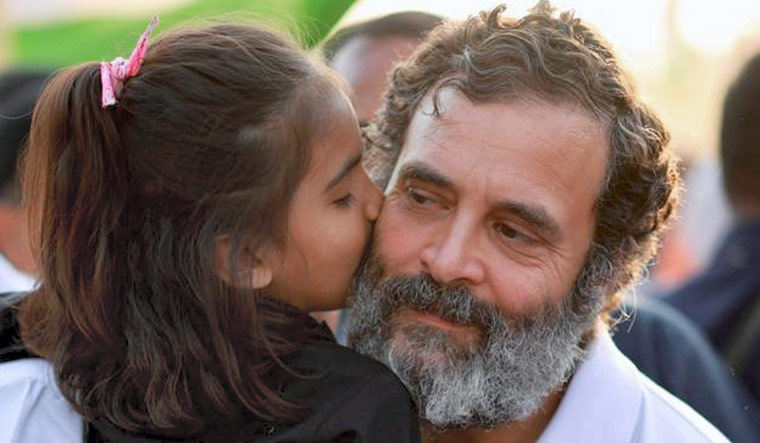 Congress leader Rahul Gandhi with a young supporter during the Bharat Jodo Yatra, in Indore | PTI

Halfway through its schedule of 12 days, Congress’ Bharat Jodo Yatra (BJY), led by Rahul Gandhi, seems to be garnering good support in Madhya Pradesh, the first Hindi belt state that the yatra is covering.

Despite the controversy that the BJP tried to rake up over an alleged pro-Pakistan slogan that was raised during the yatra, common people were seen participating in the event apart from enthusiastic Congress cadre who have been flocking to it in large numbers.

There had been skepticism about the success of the yatra in Madhya Pradesh as it is a typical Hindi belt state where the BJP has been ruling for almost two decades, save the 15-month tenure for the Congress in December 2018 and March 2020.

However, the response to the yatra, particularly in Indore, which is considered a BJP stronghold, has given much satisfaction to the Congress leaders. The excitement in the state surrounding the yatra exactly a year ahead of the polls has given a shot in the arm to the party, and the tribal-dominated Malwa and Nimad belt through which the yatra is passing is one of the most key regions electorally. An assurance of increased support here could mean a lot to the Congress.

Much to the relief of the Congress, the yatra witnessed huge participation and a rousing welcome as it entered Indore on Sunday and passed through main streets to culminate in a public meeting at the Rajwada – one of the busiest spots of the city.

On the sixth day of the yatra’s MP leg on Monday in Indore, Rahul Gandhi talked about the skepticism on the success of the yatra in MP. He said in the beginning, the media surmised that the BJY will not be successful beyond Kerala and then not beyond South India and then that it will not succeed in the Hindi belt. “Now that we are in Madhya Pradesh, the media is saying that it might have got a good response here, but won’t be successful in Rajasthan. Let us see what happens and what level the yatra reaches. The BJY has gone beyond the Congress party and is now carrying the voice of the heart of India,” he said.

Responding to a question on the personal attacks on him, he said the BJP spends thousands of crores on distorting his (Gandhi’s) image and thinks that it will be harmful to him, but in truth it is beneficial to him. “This is because I have truth with me and truth cannot be hidden for long. There will be personal attacks when one starts fighting a big power. But when these attacks come, it is an indication that I am doing something right. Actually, it is like a guru (teacher) for me, which tells me what direction to take. The battle is to understand the mentality of those confronting you and I have slowly come to understand the mentality of the BJP and the RSS very well,” Gandhi said.

The former Congress president reiterated that the yatra is apolitical and he did not want to divert the theme of the yatra by raising political issues. He said the BJY was a campaign against fear, violence, and hatred and the attempts to change the essence, culture, and DNA of India and aimed at safeguarding the essence and soul of India, which was of respect, compassion, and brotherhood.

‘Gehlot and Pilot are assets’

In reply to a question on the infighting in Rajasthan Congress, Rahul Gandhi said Chief Minister Ashok Gehlot and Sachin Pilot are both assets for the party and he did not want to comment on what they said. “I can only say that this will not at all impact the Bharat Jodo Yatra.”

On a question if the leaders in MP who left the Congress to join the BJP will be taken back if they wish to rejoin the party, Gandhi said it was a question to be put to the Congress president and state leadership. “In my opinion, if they were bought off, they cannot be trusted.”

On whether he would contest again from Amethi, Gandhi said he did not want newspapers to make headlines out of his comments on such questions and would prefer that BJY and its philosophy are written about. He said the yatra had done him a lot of good – it has taught him to fight off physical pains, increased his patience level, and changed the way he listens to others. “I listen from their viewpoint, not mine,” he said.

On a query as to what formula the Congress has to resolve the issues of unemployment and price rise, Gandhi said the idea is to move away from the concentration of wealth with a few to support small and medium traders, who have growth potential as against large corporates, and to conserve and develop the farming sector, which forms the basic structure, the foundation of Indian economy.

The BJY will cover Ujjain and Agar Malwa districts during the next six days (with a break on November 30) before proceeding into Rajasthan on the evening of December 4. In Ujjain on November 29, Gandhi is scheduled to visit the Mahakal temple and address a public meeting later.