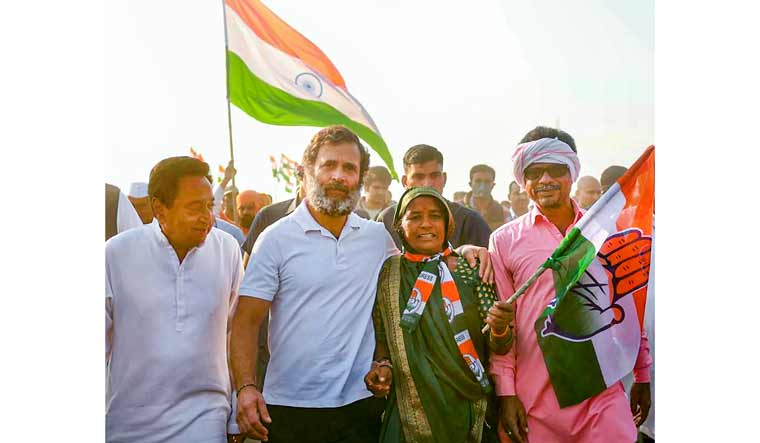 Controversy erupted on the third day of Bharat Jodo Yatra in Madhya Pradesh, with the state BJP unit circulating a video to claim that ‘Pakistan Zindabad’ slogans were raised while the yatra was passing through Khargone on Friday.

The Congress retaliated immediately with general secretary in-charge of communications, Jairam Ramesh saying on Twitter: “A video doctored by the Dirty Tricks Department of the BJP is doing the rounds to discredit the highly successful Bharat Jodo Yatra. We are taking the necessary legal action immediately. We are prepared for such tactics, and there will be payback.”

Chief Minister Shivraj Singh Chouhan has said that those raising 'Pakistan Zindabad' slogans will not be spared at any cost and stringent action will be taken against them. In a tweet, he said: “Raising Pakistan Zindabad slogans in Bharat Jodo Yatra; is this uniting Bharat or connecting with those who want to break Bharat. (You) have divided Bharat earlier, do you plan to break Bharat again?”

The video was first posted by Madhya Pradesh BJP media in-charge, who claimed that the video was put up by the MP Congress official handle but was later deleted. “Pakistan Zindabad slogan was raised openly in Bharat Jodo Yatra; this was tweeted officially from the official handle of Congress and removed later. But the truth has come out in the open as to what is in the heart of Congress,” he tweeted.

“Very shameful! Openly raised slogan of “Pakistan Zindabad” in Rahul Gandhi’s Bharat Jodo Yatra has yet again exposed the mentality of Congress to divide the country. It has again been proven that this is Bharat Todo Yatra. Rahul Gandhi should apologise to the nation for this condemnable act,” the state president said in a tweet.

Hitanand Sharma tweeted “It is very unfortunate that Pakistan Zindabad slogans are being raised at the yatra taken out by Rahul Gandhi in the name of uniting Bharat. This again displays the anti-national activities of Congress. Condemnable!”

MP Congress media department in-charge K.K. Mishra retorted by tweeting that the BJP ideology that always sought to break the country has panicked due to Rahul Gandhi’s BJY and is using doctored videos to malign it. “There will be legal action against BJP media in-charge Lokendra Parashar. Such lowly escapades will not be able to shake our unwavering goals.”

Later in a video statement, Mishra said that in keeping with the apprehension, the BJP had started to make disgusting attempts to break the yatra. This attack has started in the form of planned use of a doctored document/video by Parashar. However much you attempt to break the nation, it will not happen and the holy objectives of Rahul Gandhi’s yatra will not be defeated. He also said that Congress will initiate action against Parashar in Delhi and Madhya Pradesh.