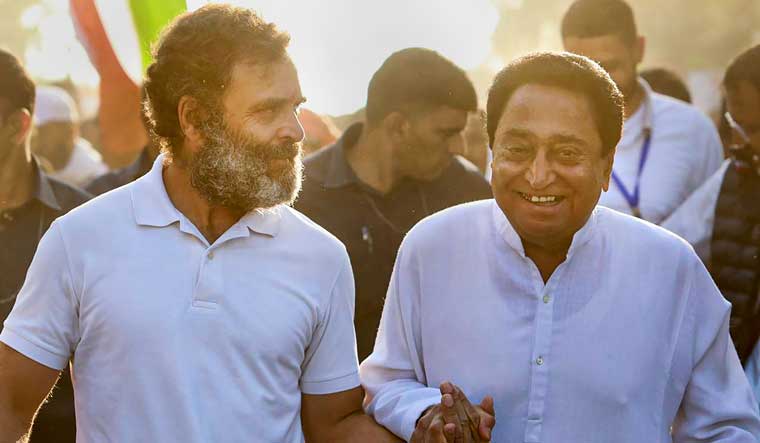 Priyanka Gandhi, who is in Indore, may also join the rally, ANI quoted sources. In his address, Rahul will highlight the need to "Save Constitution Save Democracy" as he launches an attack on the Modi government in the centre.

Besides Priyanka, Congress president Mallikarjun Kharge will also join Rahul on Saturday. According to the report, Kharge has changed his plans to reach Mhow on Saturday though he was earlier scheduled to be in Gujarat on the day.

The new Congress president's Gujarat schedule has been moved to Sunday and Monday, where he will oversee the last leg of the party's campaign. He will hold a press conference on Monday.

Meanwhile, the Yatra had entered Bodarli village in Burhanpur district on Wednesday wherein a large number of Congressmen carrying the tricolour in their hands joined the foot march.

Maharashtra Congress president Nana Patole handed over the tricolour to his Madhya Pradesh counterpart Kamal Nath to formally launch the 12-day-long yatra here.  The Yatra will cover a distance of 380 km before entering Rajasthan.

On reaching the state, Rahul lashed out at the ruling BJP government in Madhya Pradesh, stating "all democratic routes are shut" in the state.

"What I want to say is, we started the Bharat Jodo Yatra because all democratic avenues are shut. The Lok Sabha, the electoral route, the press -- everything is closed. All the institutions -- the RSS/BJP have cornered them, filled them with their own men. The judiciary is under pressure. The courts are under pressure. So we thought there is only one option. Hit the road, embrace the people, listen to the farmers, listen to the labourers, the small traders, and join them," he added.

Rahul added that the yatra was against hatred, violence and fear being spread in the country.  He also targeted the central government on the issues of unemployment and inflation, Gandhi alleged, "The BJP first spreads fear in the minds of youth, farmers and labourers and when it sets in, they convert it into violence.

Former chief ministers Kamal Nath and Digvijaya Singh too have joined Rahul in the Yatra. Others include the Leader of the Opposition in the MP Assembly Govind Singh, and former union ministers Suresh Pachouri and Arun Yadav.