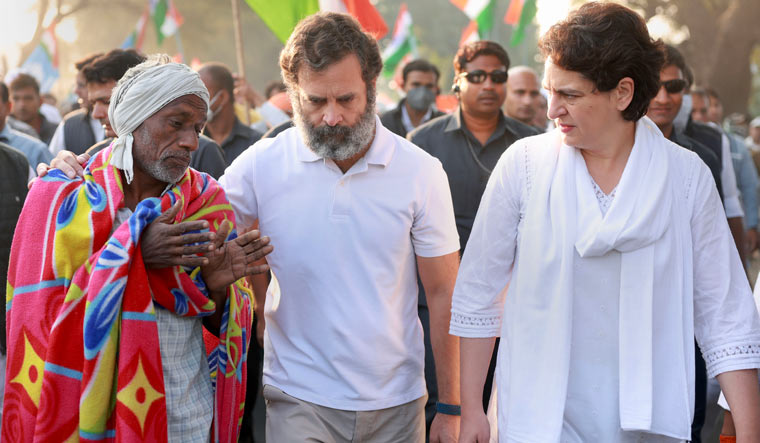 Congress leader Rahul Gandhi took his ‘Adivasi ’ versus ‘Vanvasi’ nomenclature theory forward at the tribal convention held as part of Bharat Jodo Yatra at the birthplace of tribal hero Tantya Bhil in Khandwa district of Madhya Pradesh, underlining that by calling tribals ‘Vanvasi’, the BJP plans to finish them off by denying their rights.

Gandhi said the Congress identifies tribal people as ‘Adivasi’, which means the original inhabitants of the land and thus the true owners of India. He called on the BJP to apologise to the tribals for insulting them by calling them ‘Vanvasis’ and promised that when the Congress came back to power, it will restore all the rights to the tribal people.

The route of Bharat Jodo Yatra (BJY) through the predominant tribal belt of Madhya Pradesh and Rahul Gandhi’s stopover and public meeting with tribal people at Tantya Bhil’s birthplace on the second day of the yatra in the state, is being seen as a move by the Congress to keep its electoral hold over the tribal community intact. In 2018 polls, Congress won 31 of the 47 tribal reserved seats in the state – something that helped it come very close to the majority and form a government.

Though the Congress lost its government and the BJP that came back to power has been making sustained efforts to woo back the tribal voters, the opposition party has also kept its keen focus on the section, making all attempts to highlight the failures of the BJP with regard to tribal rights, safety, and prosperity.

Rahul Gandhi said as soon as the name of Tantya Mama came up – words like ‘Adivasi’, fearlessness, struggle and revolutionary came to the mind. He said Tantya Mama was fearless even when he was hanged by the British because his fear was overshadowed by the love for his people.

“Now Modi ji has brought in the word ‘Vanvasi’. It means that you are not the original owner; you just live in the forests. The second meaning is that you should not get rights outside of forests and the third meaning is right before you – BJP governments are rampantly cutting down jungles everywhere.

When the forests vanish, there will be no place for you in this country. Why am I telling you these words? We call you ‘Adivasi’, which means that we consider you the original owners of the country. They call you ‘Vanvasi’ as they want to strip you of all your rights and want you to forget that you are the original owners. The BJP should apologise with folded hands for calling you ‘Vanvasi’.

He added that after the BJP has apologised, they should restore the rights of land, water and forests to the tribals and stop attempts to dilute laws like PESA (Panchayats Extension to Scheduled Areas) Act, Land Acquisition Bill and Forest Rights Act.

“If they don’t do it, then as soon as our government is back in power, we will implement the word ‘Adivasi’ in true sense and start restoring your rights one after another. We will restore the rights of water, land and forests to you,” Gandhi said.

He added that everyone knows that tribals were subject to maximum atrocities in Madhya Pradesh. But people need a state where tribal people are respected and provided safety. “We don’t want a state where the word ‘Vanvasi’ is used,” Gandhi said.

The Congress leader said looking at the expressions on the faces of those in the audience he was certain that they had understood what he was saying. “This BJP ideology—we are talking of Tantya Mama—he was hanged by the British and the RSS helped the British always, this is something that the entire world knows. RSS ideology helped the British who hanged Tantya Mama and the same was done with Birsa Munda too.

These great people fought for the tribal people against the British. It was Congress that drove the British away from India and when we were fighting the British, RSS people were standing with them. So it is clear – ‘Vanvasi’ is a word to finish you, while ‘Adivasi’ is a word to give you your rights and make you real owners of India.”

Earlier, Madhya Pradesh Congress chief and former chief minister Kamal Nath said Rahul Gandhi had insisted upon making a stopover at Tantya Mama’s birthplace and this showed his commitment to the tribal people. Congress’ tribal MLAs sat on the dais with Gandhi for the convention attended by a fair gathering of tribal people.