Chouhan flaged off a ‘janjatiya gaurav yatra’ from Badoda Ahir 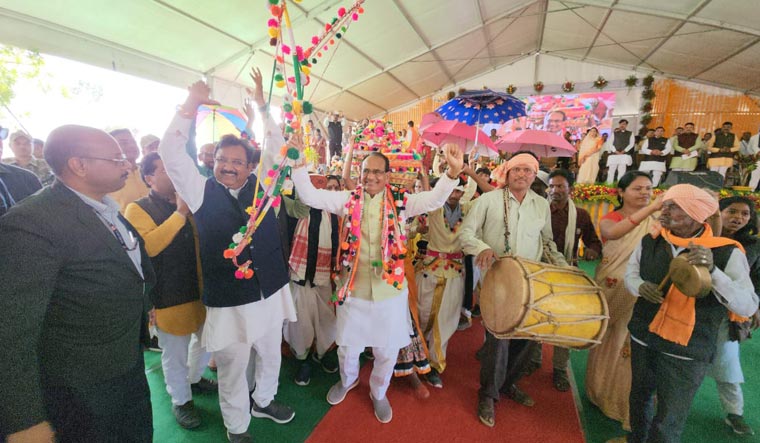 CM Shivraj Singh Chouhan participates in tribal dance in a PESA awareness convention at Pandhana in Khandwa on Wednesday.

Chouhan visited Badoda Ahir – birthplace of Tantya Bhil - in Pandhana of Khandwa district on Wednesday afternoon even as the Congress’ Bharat Jodo Yatra (BJY) began its Madhya Pradesh leg from neighbouring Burhanpur earlier in the day. He also participated in a ‘PESA awareness convention in Pandhana’.

Rahul Gandhi, who is leading the BJY along with 119 permanent walkers, is scheduled to visit Badoda Ahir on Thursday (November 24) to pay homage to Tantya Bhil and address a public meeting there. He will be accompanied on the occasion by his sister and Congress general secretary Priyanka Gandhi Vadra, who will join the yatra for the first time on the day, since it began in Kanyakumari in Tamil Nadu on September 17.

The quickly arranged visit of Chouhan to the birthplace of the tribal icon on Wednesday is looked upon as a reaction to the huge response that the BJY has been garnering in southern states and Maharashtra. Also, the yatra evoked good response in Burhanpur on its first day in the state.

Madhya Pradesh is going to Assembly polls in less than a year and tribal voters are expected to play a decisive role in the making of the next government in the state. There are 47 tribal reserved seats in Madhya Pradesh Assembly and it has been seen in the past that the party that garners majority tribal seats manages to form the government. This is the reason that the ruling BJP and the opposition Congress have been trying to woo this section of the voters.

The BJP has organised several mega events in the state during the past one year with tribal focus and featuring Prime Minister Narendra Modi and Union Home Minister Amit Shah, and recently newly-elected President Droupadi Murmu—who herself hails from the tribal community.

During her November 15 visit to Shahdol, President Murmu formally implemented the rules of the Panchayats Extension to Scheduled Areas (PESA) Act in the state. Since then, the BJP has launched a series of ‘PESA awareness conventions’ in the tribal areas of the state and Chouhan visited Pandhana in this context and also flagged off the ‘janjatiya gaurav yatra’ from Badoda Ahir.

Speaking at the event, Chouhan said that he had come to flag off one of the several 'gaurav yatras' that are taking off from different parts of the state and are scheduled to reach Patalpani – where Tantya Bhil was martyred – ahead of the tribal hero’s martyrdom day on December 4, when a programme will be held in Indore.

He added that similar yatras and programme were organised last year too, but this time another social revolution has come ahead of the yatras in the form of implementation of PESA rules. The implementation, the CM said, will give rights to the tribal people.

Later at the convention, Chouhan said that the PESA Act was not against any community, but for the empowerment of tribal people. He added that the implementation of the Act will ensure land rights of the people, will give the power of selling and utilizing the proceeds of the locally grown things like tendu leaves, fish and water chestnuts to the gram sabhas (village committees). Also no liquor shops could be opened without the approval of gram sabhas. The gram sabhas will also be able to monitor implementation of various welfare schemes.