In big push for 'Make in India', Modi lays foundation stone for Tata-Airbus plant in Vadodara

For the first time, Airbus will manufacture C-295 transport aircraft in India 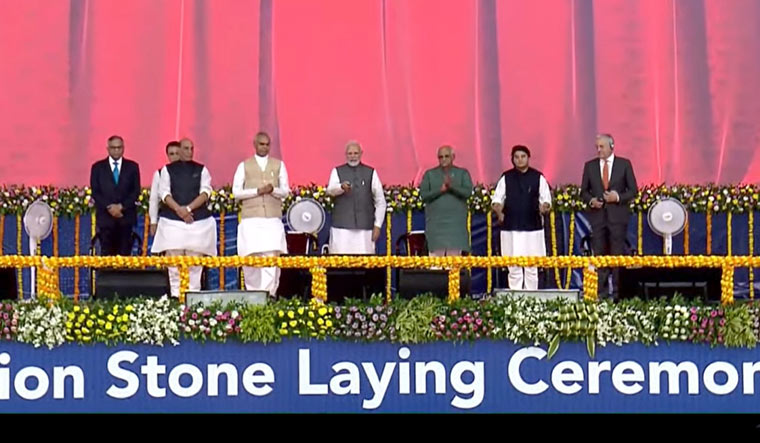 Prime Minister Narendra Modi on Saturday exhorted established industries to set up start-up cells in their respective industries and handhold the start-ups for their combined growth.

The prime minister began his three-day visit to his poll-bound home state Gujarat with this engagement.

The grapevine in Gujarat’s political circles is that the Election Commission is likely to announce the dates of the assembly elections once the prime minister returns to Delhi.

However, considering the presence of representatives from the Tata Group and the Airbus, Modi refrained from making any direct political remark. Albeit on several occasions during his speech, he mentioned the work done in the last eight years under his tenure at the Centre and compared it with the “thought processes” of earlier governments, without taking anyone’s name.

While exhorting the established players to see how the research being done can benefit them and the start-ups, Modi asked them to aggressively invest and take maximum benefit at a time when there is an environment of trust.

Talking about the Vadodara project, he said that it is for the first time such a big investment has come in the defence sector. Vadodara and India would become an aviation hub in the world and in future export orders would also be taken. The project proposes to create over 10,000 jobs.

Laying emphasis on “Make in India, Make for the Globe”, the prime minister also said that in the coming 10-15 years there will be a demand of 2,000 passenger and cargo planes in India alone. “I see a day when passenger planes will be manufactured in India,” he remarked, further pointing out that India is preparing for it now.

The prime minister said that the facility in Vadodara is a message for the world that despite Covid-19 and the war hampering the supply chain, the growth momentum is on and it has not happened just like that.

Modi said that the operating conditions have been improved and the focus is on quality and cost effective output. According to him, India has a talent pool of skilled manpower.

He pointed out that in the last eight years an environment has been created for reforms in the manufacturing sector and earlier the ease of doing business was never given so much emphasis.

Modi spoke about the corporate tax structures, how India has paved the way for FDIs and brought in a new chapter in the field of labour reforms.

The mind-set has been changed, he said. Modi accused the earlier governments of not letting the talents from the private sector come up. He alleged that the earlier moves of giving subsidies to the manufacturing sectors caused the damage to the sector.

Unlike earlier times when the arrangements were stop-gap, now there is a policy of incentives and the policies are predictable and futuristic.

He said that the government is trying to improve the logistics and India is now looking at both manufacturing and service sector.

The prime minister said that defence and aerospace are the pillars of “Atmanirbhar Bharat”.

Modi has engagements in Kevadia, Ahmedabad, Banaskantha and Jamughoda.