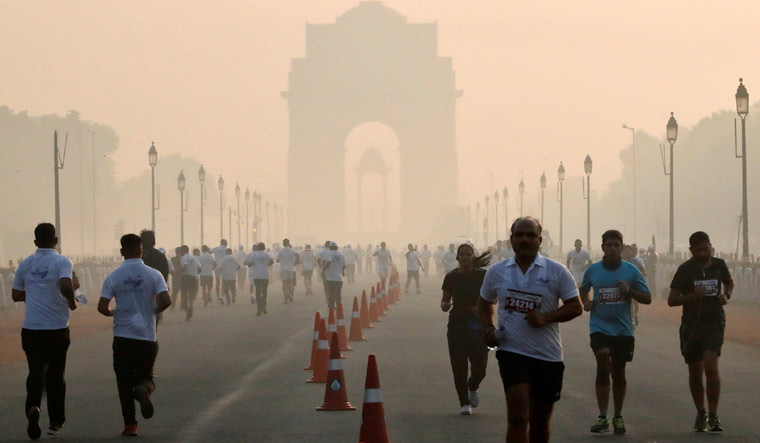 There was 30 per cent less pollution on Diwali in Delhi as compared to last year and the city recorded its best air quality for the day after the festival in five years, Environment Minister Gopal Rai said on Tuesday.

The air quality index (AQI) stood at 323 on Tuesday (the day after Diwali) as compared to 462 last year, which means the "air pollution declined by over 30 per cent," he said.

"People of Delhi were very thoughtful on Diwali this year and I want to thank them. Today, the pollution level is the lowest in five years," Rai told reporters on the sidelines of an event where he flagged off 150 mobile anti-smog guns.

The minister said that there has been a decline of 30 per cent in pollution levels as compared to the previous year.

The Delhi government had in September reimposed a complete ban on the production, sale and use of all types of firecrackers till January 1, including on Diwali, a practice it has been following for the last two years.

Rai had last week said that bursting firecrackers on Diwali in Delhi will attract a jail term of up to six months and a fine of Rs 200.

"The AQI of 323 is still worrying and tells us that air pollution will increase amid low temperatures in the coming days," he said.

He further claimed the Punjab government controlled stubble burning in the state without support from the Centre.

Emissions from firecrackers and farm fires have contributed significantly to Delhi's PM2.5 pollution on Diwali over the years.

Since Diwali was observed early in the season this year, moderately warm and windier conditions prevented rapid accumulation of pollutants from firecrackers bursting and reduced the effect of stubble burning, according to experts.

Diwali was celebrated on November 4 in 2021 and on November 14 in 2020 when temperatures were considerably low and winds were calm.