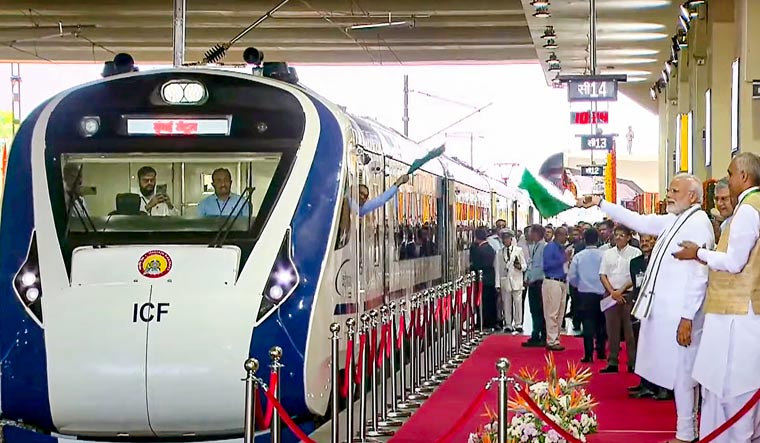 On Day Two of his visit to Gujarat, Prime Minister Narendra Modi laid strong emphasis on the strength and versatility of the "Double Engine Government". He was speaking on the occasion of flagging off the Vande Bharat Express train between Gandhinagar and Mumbai. Later, the PM also inaugurated the first phase of the Metro in Ahmedabad.

While addressing the gathering, PM Modi said that in the last eight years, the government had linked infrastructure development with people's aspirations.

"Earlier, taxpayers' money was used for political gains and infrastructure announcements were made only during elections. We changed this," Modi added.

The Prime Minister also said that the “Double Engine Government in Gujarat” is making efforts towards modernizing infrastructure with a long-term vision.

Modi said that his government’s target is to run 75 Vande Bharat Express trains by August 2023. The unique feature of the train is that it can attain a speed of 100 kilometres within 52 seconds.

Sharing his riding experience in the Express train, Modi said that the noise in the compartments is 100 times less compared to that of the noise in an aircraft.

The Prime Minister also spoke about multi-model connectivity and developing twin cities. "People have heard about New Jersey and New York but our cities are also not behind," said the PM. He said the way cities were being developed will give impetus to India becoming a developed Nation in 25 years.

Modi also reached out to the youth, saying that youngsters and engineering students should be given an opportunity to see the metro rail and how it's been made.

It will inculcate the spirit of aspiration amongst them and will help them cultivate a feeling of their own so that they will not damage the property in any agitation, he added.