Jaipur fiasco further exposes many weaknesses of the crisis-ridden Congress

Neither Gehlot, Pilot or the Cong high command coming out looking good of the fiasco 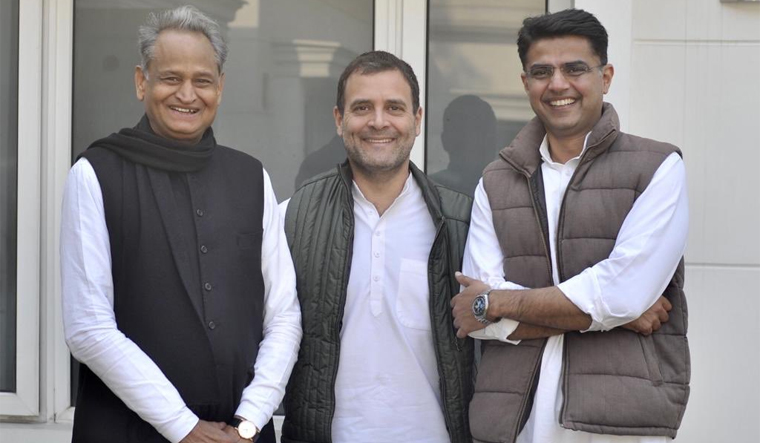 Considered till a few days ago the de facto official candidate of the Congress for the election to the post of party president, Rajasthan Chief Minister Ashok Gehlot today declared that he has decided not to vie for the top job in the party.

The veteran leader's announcement marks a major turn in events in the run up to the intra-party polls, with none of the major players in the fiasco, Gehlot, his bete noire Sachin Pilot or the Congress high command, coming out looking good.

On September 25, a Sunday, Gehlot had travelled to Jaisalmer to visit the Tanot Rai Mata Mandir close to the India-Pakistan border, presumably, to seek blessings before he filed his nomination for the election to the post of Congress President. In Jaipur, the party's central observers Mallikarjun Kharge and Ajay Maken had arrived to hold a meeting of the Congress Legislature Party later that evening. The agenda of the meeting was to roll out a succession plan since Gehlot would have moved to Delhi.

The developments in Rajasthan on September 25 seemed to be going as per script, with Gehlot saying in Jaisalmer that it was time for the new generation to lead the show and that a one-line resolution empowering the central leadership to take a decision on his successor as chief minister was set to be passed at the CLP meeting. It was interpreted as a sign that Pilot, who has been waiting on the sidelines, was set to succeed him at the helm in Jaipur.

However, even as preparations were underway at Gehlot's official residence, to host the CLP meeting that evening, marquees were being set up in the lawns of Parliamentary Affairs Minister Shanti Dhariwal's residence. A bus was on stand-by in a bylane nearby. And the purpose of all of it became clear soon. Two hours before the CLP meeting scheduled to be held at 7pm, legislators began trickling into the residence of Dhariwal, a close confidant of Gehlot. The MLAs, with claims made that there were over 80 of them, stayed put at Dhariwal's house instead of heading to the CLP meet. It soon became clear that they were in no mood to oblige the party high command with a one-line resolution empowering it to select Gehlot's successor.

The script that the party high command had expected would be followed to allow for a transition of power in Jaipur, with Pilot widely believed to be the central leadership's preferred choice as Gehlot's replacement, had gone awry. Instead, what unfolded was a spectacular show of defiance of the Congress High Command. The MLAs emerged from Dhariwal's residence and boarded the bus that had moved to the front gate of the house by then. And they went not to the CLP meeting but to Vidhan Sabha Speaker C.P.Joshi's residence to resign en masse in protest against any attempt to make any of the legislators involved in the Pilot-led rebellion of 2020 against the Gehlot government the chief minister. It was apparent that the brinkmanship was aimed at scuttling any moves to name Pilot as Gehlot's successor.

The developments in Rajasthan left the central leadership stunned. Gehlot did vehemently protest that he had nothing to do with the open defiance of the MLAs, and his supporters said that he was on that day, when the meeting at Dhariwal's residence would have been planned, at the Indo-Pak border and his mobile phone had no connectivity. But the party high command sees the turn of events as a case of a staunch loyalist and someone who was the Gandhis' choice for the post of party president staking that reputation to safeguard his political interests in Rajasthan.

Gehlot has proved that he enjoys the support of majority of the MLAs and that forcing Pilot on the legislators can result in a vertical split in the state unit. The party high command's indications to him had been that while it wanted him to be the next president of the party, it would take a call on who would succeed him in Jaipur. Gehlot's supporters say this would have amounted to diminishing Gehlot's stature even before he had taken over as party chief since he could not have a say even in his own political stronghold.

The irony of the situation, of a person who was seen as ideal candidate for the Congress president's elections for being a loyalist and a traditionalist, also landed the party leadership in a piquant situation with regard to the election to choose the new party chief. Gehlot was the first choice since he ticked several boxes. He has a vast experience as an administrator and as an organisation man. He knows the workings of the Congress like perhaps no other leader. He has the necessary heft and stature to deal with regional leaders and take on Prime Minister Narendra Modi. And he also has the authority to deal with leaders and workers from all over the country.

This arrangement would also have allowed the party leadership to bring about a generational change in Jaipur. Desperate to hold on to Rajasthan, one of the only two states where the party is in power, it hoped to deal with anti-incumbency against the present regime by offering the voters a new deal in the form of Pilot.

Now, another veteran leader, former Madhya Pradesh Chief Minister Digvijaya Singh is set to file nomination for the election to the post of Congress President. It is unclear, though, whether he has the backing of the Gandhis. However, it is pointed out that Singh, who is coordinating former party chief Rahul Gandhi's Bharat Jodo Yatra, would not have flown back to Delhi from Kerala where the padayatra was passing through to file his nomination papers had it not been for a directive from the central leadership.

The Jaipur fiasco, meanwhile, has made it clear that the weakened position of the Gandhis has made it difficult for them to make strong regional leaders fall in line. This was quite visible in the manner in which Gehlot loyalists openly challenged what has been a routine affair in the party in the past – CLP members passing a one-line resolution authorising the party high command to take a decision on who will be their leader.

Also, it has come as an embarrassment for the leadership, especially at a time when Rahul is undertaking the Bharat Jodo Yatra and rivals are asking if he should not be focusing on uniting his party instead. According to party sources, Sonia feels Gehlot betrayed her trust even as the chief minister has conveyed his regret over what transpired in Jaipur on September 25.

“The Congress will not weaken on the basis of what the BJP is saying or doing. This is an internal issue of the Congress in Rajasthan. MLAs were agitated over the buzz that one amongst those who had colluded with the BJP to topple the government was being made the chief minister.

However this is like a family matter which will be resolved. Not one MLA is against Sonia Gandhi ji or Rahul Gandhi ji,” said Pratap Singh Khachariyawas, minister in the Gehlot cabinet and a known loyalist of the chief minister.

It is felt that none of the main actors in the political drama have come out looking good. If the party high command was left red faced by the public rejection of its plans, Gehlot, it is felt, put at stake his reputation as a loyalist and for what is seen as a bid to hold on to power in Rajasthan. Time and again, he has also been accused by his detractors of being unwilling to let go of Rajasthan because he is also insecure about the political future of his son Vaibhav Gehlot. His critics also say that he cannot distance himself from the MLAs' rebellion.

“Ashok Gehlot has to take complete responsibility for the meeting of MLAs held at the residence of Shanti Dhariwal. He is the leader of the legislature party and hence he can not feign ignorance about what happened,” said Rajendra Chaudhary, vice-president in Rajasthan Congress.

The turn of events has shown that Pilot continues to be haunted by the rebellion he carried out in 2020 against the Gehlot regime, as he was accused of having colluded with the BJP to try and bring down the government. Political observers also say that he is yet to prove that his support in the state unit or in the government has increased from what it was in 2020.

“Sachin Pilot has the backing of the Gandhis. But he also needs local support to strengthen his claim for the chief minister's post. He has to prove that he has the required support. Two years after his rebellion, there is little difference in the extent of support he has,” said political analyst Manish Godha.

The Jaipur problem has only further exposed the many weaknesses of the crisis-ridden Congress.