The notification said PFI was radicalizing a particular section of society 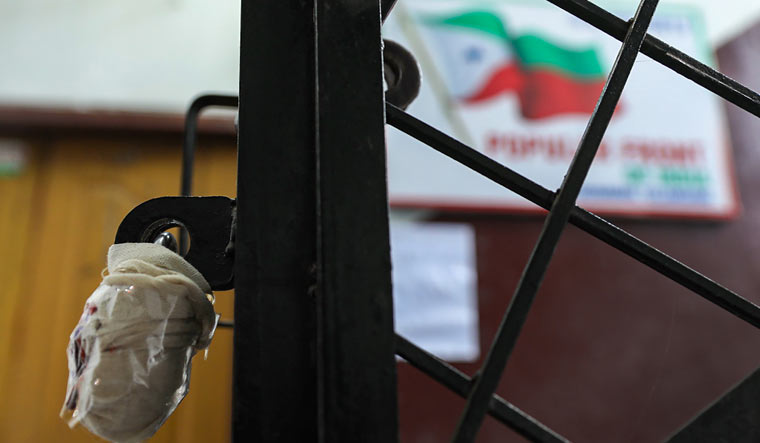 A sealed Popular Front of India office in Hyderabad | PTI

The Centre has declared the Popular Front of India (PFI) and its associates or affiliates and fronts as an 'unlawful association' under the Unlawful Activities (Prevention) Act (UAPA). A ban has also been imposed on these outfits for five years.

According to a government notification issued Tuesday evening, PFI and its associates or affiliates and fronts have been indulging in unlawful activities that are prejudicial to the integrity, sovereignty and security of the country. It further added that these organisations have the potential to disturb public peace and communal harmony of the country and support militancy, reported ANI News.

This comes as the central agencies undertook the second round of raids on PFI offices across eight states on Tuesday, which saw the arrest of over 240 leaders across the country.

The notification added that though the PFI had been operating openly as a socio-economic, educational and political organisation, it has been pursuing a secret agenda to radicalise a particular section of society, thereby undermining the constitution.

Adding that the PFI has links to proscribed organisations like the  Jamaat-ul-Mujahideen Bangladesh, the centre's notification said some of PFI's founding members were the leaders of the banned organisation Students Islamic Movement Of India (SIMI).

The order said there have been instances where the PFI members were found to have links with terrorist groups. Some of its members have even joined ISIS and participated in terror activities in Syria, Iraq and Afghanistan.

“The Central Government, having regard to the above circumstances, is of the firm opinion that it is necessary to declare the PFI and its associates or affiliates or fronts as an unlawful association with immediate effect, and accordingly, in the exercise of the powers conferred by the proviso to sub-section (3) of section 3 of the said Act, the Central Government hereby directs that this notification shall, subject to any order that may be made under section 4 of the said Act, have effect for a period of five years from the date of its publication in the Official Gazette," the order read.

The PFI had earlier alleged in a Facebook post that arrests were a 'witch hunt' and carried out without any incriminating evidence.