Bhagwat also interacts with children at a madrassa 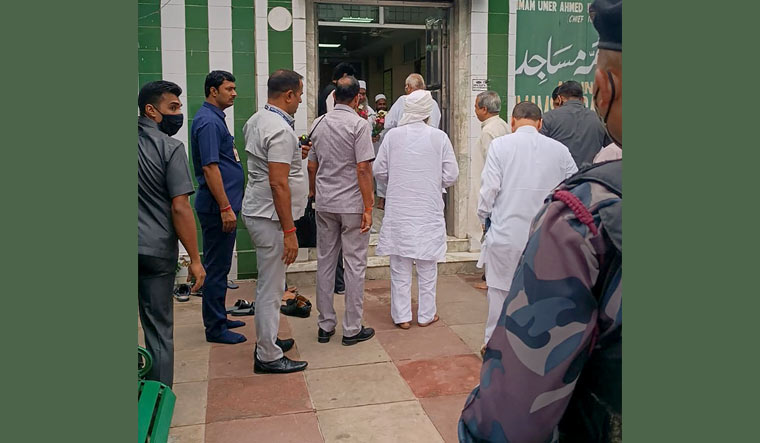 Rashtriya Swayamsevak Sangh chief Mohan Bhagwat on Thursday visited a mosque and a madrassa in Delhi and held discussion with the All India Muslim Imam Organisation (AIIO) leaders. RSS sources said issues like hijab controversy and Gyanvapi were discussed in the meeting.

Bhagwat has met several Muslim leader and intellectuals in the last few days as part of Sangh's outreach to the minority community.

Reports said the closed-door meeting between Bhagwat and Imam organisation chief Umer Ahmed Ilyasi at the mosque in Kasturba Gandhi Marg in central Delhi lasted for more than an hour. Bhagwat was accompanied by other RSS leaders Krishna Gopal, Ram Lal and Indresh Kumar.

"Mohan Bhagwat is the 'rashtra pita' (father of the nation) and the head of the largest social organization. The chief talked to the children about what is taught inside the madrassa,” Ilyasi said after the meeting. However, Bhagwat intervened to say there is only one father of the nation and said everyone is Bharat ki santan' (child of the nation).

"With this visit of Bhagwat, a message should go that we all want to work towards strengthening India. For all of us, the nation comes first. Our DNA is the same, it is just that our religion and methods of worshipping god are different," Ilyasi said.

During the meeting, Bhagwat reportedly raised the issue of the usage of the word "kafir" for Hindus, which he said does not send out a good message. The group of Muslim intellectuals, on their part, objected to some right-wing activists calling Muslims "jihadi" and "Pakistanis", reported PTI.

Later, Bhagwant interacted with children at the madrassa. He told them that they are the future of the country and so they should focus on their studies and work for the nation.