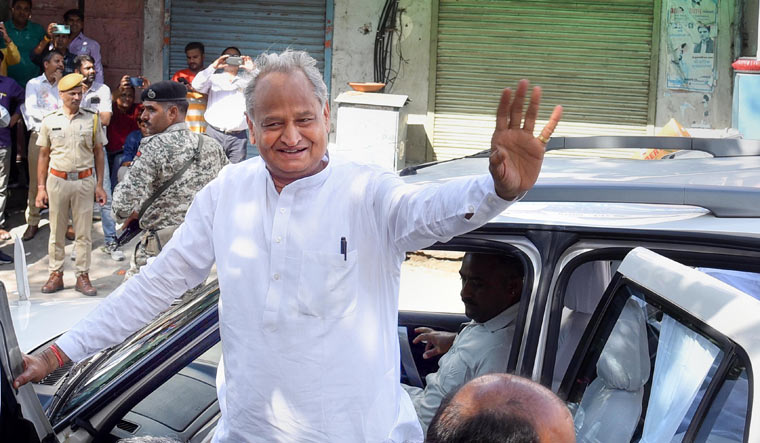 On the day the Congress issued notification for the party president poll to be held on October 17, Rajasthan Chief Minister Ashok Gehlot, who is considered a top contender to the top post, met party leader Rahul Gandhi in Kochi. The closed-door meeting between the two leaders lasted for almost two hours.

The meeting assumes significance as Rahul had earlier in the day batted for the "one person, one post" norm in the party in lines with the Udaipur Chintan Shivir. Reports had suggested that Gehlot would seek to retain his chief ministerial post if he became the Congress president.

Gehlot arrived in Kochi in the afternoon and marched with Rahul in his Bharat Jodo Yatra. Notably, he was also present at the Adlux Convention Centre where Rahul held a press conference and reiterated his stand on the 'one-person one-post' norm.

"What we decided at Udaipur, we expect that commitment to be maintained," Rahul said on being asked whether he would stand by the Chintan Shivir decision on 'one man, one post'.

Rahul's remarks would mean that Gehlot will have to resign from the post of chief minister if he is elected as the Congress president. Reports said his rival Sachin Pilot is likely to replace him as the Rajasthan chief minister.

Pliot has been vying for the CM post ever since Congress wrested power in Rajasthan in 2018. In 2020, Pilot launched an open revolt which brought the Gehlot government on the brink of collapse. The one-month long stalemate ended after the high command intervened.

However, Gehlot enjoys a huge control over the Congress legislature party in Rajasthan. According to report, if he is elected to the Congress president post, Gehlot would want one of his loyalists to take over as the CM and is likely to suggest the name of Speaker C.P. Joshi to the post.

Pilot had met Rahul Gandhi in Kochi on Wednesday. Talking to a TV channel, Pilot said he would accept whatever role the party leadership decides for him.

Gehlot had earlier maintained that if a minister in a state stands for Congress president election, that person can stay a minister and also contest polls. "Time will tell whether I remain (CM) or not. I would like to stay where the party benefits from me, I will not back down," he had asserted.

The Congress on Thursday issued a notification for the party president poll, setting the ball rolling for electing the successor to the longest-serving chief Sonia Gandhi. Along with Gehlot, senior leader Shashi Tharoor is also seen as potential contender.