Photo of Savarkar on posters to welcome Rahul Gandhi in Kerala; party calls it 'printing mistake' 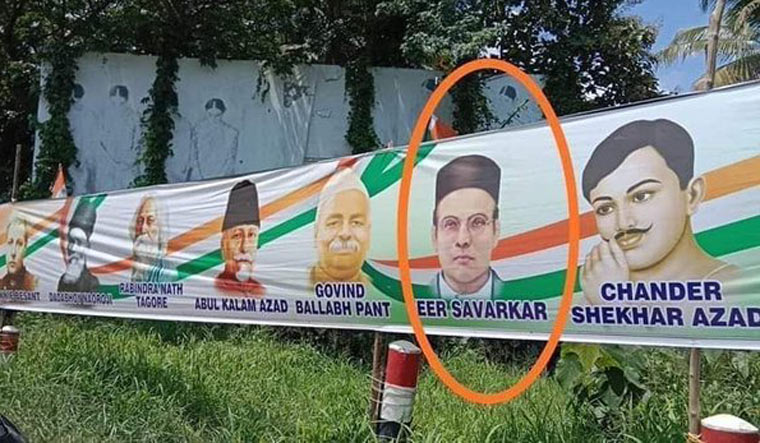 A few days after the Congress faced an embarrassment after a district office of the party in Thrissur district in Kerala was painted in vivid saffron shade as part of preparations to welcome Rahul Gandhi, who is undertaking the 3,570-km yatra from Kanyakumari to Kashmir, the party again found itself in an awkward position when a poster of the Bharat Jodo Yatra showed a photo of V.D. Savarkar along with other freedom fighters.

According to media reports, the banner was put up at Aluva in Kochi by the party workers before the arrival of Rahul Gandhi in the city. The image of the right-wing ideologue, whom the Congress does not hold in high esteem, was placed between the pictures of Govind Ballabh Pant and Chandra Shekhar Azad.

The poster had also got the spelling of Chandra Shekhar Azad wrong—the freedom fighter's name was written as Chander Shekhar Azad.

The party was quick to cover it up with an image of M.K. Gandhi, but the poster had already landed on social media.

The Congress tried to minimise the damage, calling it a "printing mistake" and sacking a local leader who was allegedly responsible for the poster.

According to OnManorama, the party said the banner had nothing to do with the Congress or the yatra as it was put up by a local activist.