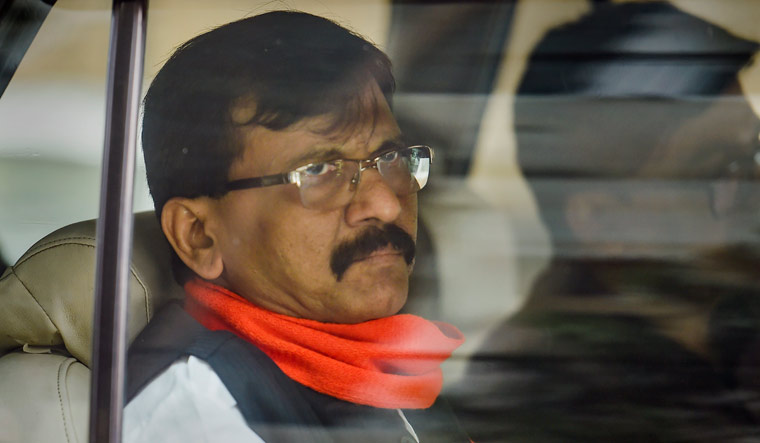 New evidence suggests Shiv Sena MP Sanjay Raut may have played a crucial role in siphoning off proceeds of crime (POC) in the case pertaining to alleged financial irregularities in a housing project in suburban Mumbai, the Enforcement Directorate (ED) has claimed in its supplementary charge-sheet.

The ED also claimed the Sena leader (60), currently in jail, along with other officials associated with the redevelopment of Patra Chawl (chawls are rows of tenements/tiny apartments), was present at a meeting called by the then-chief minister in 2007 to discuss the financial implication of the multi-crore project.

The anti-money laundering agency arrested the Rajya Sabha member on August 1 in connection with alleged financial irregularities in the redevelopment of Patra Chawl in suburban Goregaon. It had last week filed a supplementary charge-sheet naming Sanjay Raut as an accused in the case before a special PMLA court which took cognisance of the document on Monday.

The ED probe pertains to alleged financial irregularities in the redevelopment of Patra Chawl and related property transactions involving his wife and alleged associates.

Siddharth Nagar, popularly known as Patra Chawl, is an area located in Goregaon, a northern Mumbai suburb. It housed nearly 672 homes spread over 47 acres of land.

In 2008, the Maharashtra Housing and Development Authority (MHDA) handed over the project of redeveloping the chawl to Guru Ashish Construction Pvt Ltd (GACPL), a sister company of HDIL (Housing Development and Infrastructure Ltd). GACPL was supposed to build 672 flats for people there and apartments for state housing agency MHDA and sell the remaining land to private developers for the private company's own development works.

The company neither redeveloped the chawl nor built any flats that was to be handed over to MHADA and sold land parcels and the Floor Space Index (FSI) to other builders for Rs 1,034 crore. GACPL instead launched its own project called 'The Meadows' and took booking amounts totalling Rs 138 crore from flat buyers.

FSI is the maximum area that can be constructed on a plot of land. For instance, if one has 1,000 square feet of land on which wants to build a residential/commercial building and the FSI in that locality is 1.5, then he can build up to 1,500 sq ft of covered structures on the plot.

The ED claimed Pravin Raut, a close associate of Sanjay Raut, and other directors of GACPL misled MHADA and also the Maharashtra government, and sold the FSI to other real estate developers for Rs 901.79 crore and never completed the project they were handed over.

The central agency said though on paper an agreement was executed for the interest of three parties, only interest of Wadhwans (HDIL promoters Rakesh and Sarang Wadhawan) were protected as a result of which generated benefits of around Rs 1,000 crore were diverted in a systematic manner to their group companies instead of utilizing the same for the chawl project.

On the basis of new evidence that have surfaced, it appears Sanjay Raut may have also played a major role along with other accused due to which POC (proceeds of crime) were siphoned off instead of utilization of the same for the tenants and other buyers who had booked their flats with developers and put their hard earned money, the ED claimed in the charge-sheet.

However, Sanjay Raut told the ED he had no knowledge about the Patra Chawl project and came to know about it through media reports published in the past two years.

The Rajya Sabha MP has also denied having entered into any financial or business transaction with Pravin Raut, who as per the probe agency, was working as a "front man" for the politician.

The Sena leader has claimed he does not know Rakesh Kumar Wadhwan, Sarang Wadhwan (HDIL promoters) and Nippun Thakkar, all accused in the case. The Member of Parliament has said he did not have any knowledge about the involvement of Pravin Raut in the Patra Chawl redevelopment.

Sanjay Raut has said he was not directly involved in any real estate project, but his wife Varsha Raut along with Madhuri Raut, spouse of Pravin Raut, had got associated with Avni Construction and Auri Infrastructure which intended to develop some buildings, which as per his knowledge, were supposed to be outside Mumbai.

On the recovery of Rs 11 lakh in cash from his residence in suburban Bhandup, the Sena leader said it was contributed by Shiv Sena workers for their Ayodhya visit in the first week of June 2022.

On foreign trips, Sanjay Raut said Swapna Patker, a witness in the case, told him they were planning to visit China and Hong Kong.

Sanjay Raut's lawyer Vikrant Sabne said, In view of the charge-sheet, the ED should answer that if (Sena MLA) Pratap Sarnaik has been discharged on the basis of reports filed by the prosecution in the principal offence, then in the judicial order of March 21, 2020, a similar undertaking was given by the prosecution in Patra Chawl case in favour of Pravin Raut and on the basis that Pravin was released on bail."

"This order is not yet challenged, then the question arises if Sarnaik has been discharged why similar relief should not be granted to (Sanjay) Raut as equality before law is the basis of our judicial system," the lawyer added.

The chief metropolitan magistrate's court had on Wednesday last accepted the closure report filed by the Mumbai police's Economic Offences Wing (EOW) in a case against Topsgrup Services and Solution Ltd. It was this case, based on which, the ED had lodged a money laundering case against Sarnaik. Meanwhile, the daughter of a property owner in Alibag, in her statement to the ED, has claimed her father had purchased 1 acre of land in 1995 and constructed a bungalow and in the rest, he had made approximately 16 plots.

Her father sold 7 to 8 plots to some persons and the remaining plots were forcibly acquired by Sanjay Raut, she told the agency.

The witness further said her father had no intention to sell the land in Kihim (in Alibag), but it was sold due to threatening calls received from workers of Sanjay Raut.