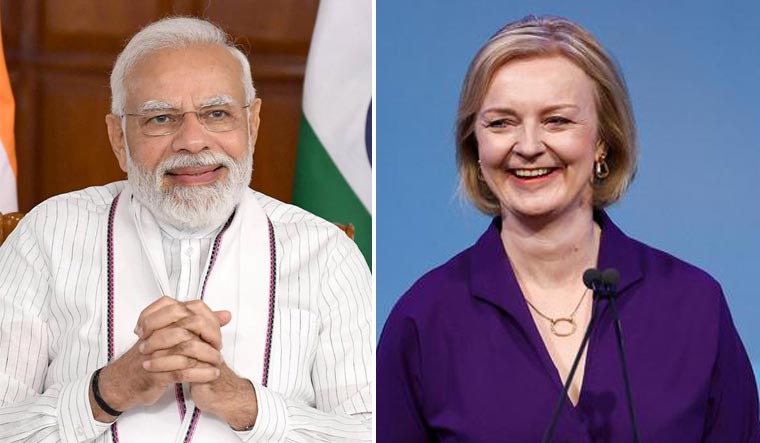 Prime Minister Narendra Modi spoke to newly sworn-in British PM Liz Truss on phone on Saturday and discussed various bilateral issues. Modi congratulated Truss on assuming the office of the prime minister and also appreciated her contributions to the India-UK bilateral relationship in her previous roles as trade secretary and foreign secretary

Both leaders committed to further strengthen the Comprehensive Strategic Partnership between India and UK, said a statement issued by the Prime Minister's Office.

“The two leaders discussed various issues of bilateral interest including the progress in the implementation of the Roadmap 2030, ongoing FTA negotiations, defence and security cooperation, and the people-to-people ties between both countries,” the PMO said.

“On behalf of the people of India, Prime Minister Modi conveyed deep condolences to the Royal family and the people of UK on the sad demise of Her Majesty Queen Elizabeth II,” it said.

Truss was appointed as Britain's new prime minister on September 6 after beating Indian-origin Rishi Sunak. She is the third female premier of the country.

The 47-year-old leader had described India as a "big, major opportunity" and believes the UK and India are "in a sweet spot of the trade dynamics that are building up."

Recently on the campaign trail, Truss reaffirmed that she remains "very, very committed" to strengthen bilateral ties at a hustings event of the party's Conservative Friends of India (CFIN) diaspora group. She also committed herself to getting the India-UK FTA done, preferably by Diwali – the deadline set by predecessor Boris Johnson – but "definitely by the end of the year."

She has repeatedly flagged enhanced defence and security cooperation with the Indo-Pacific region in order to meet her "network of liberty" goals as a counter-balance to the aggression of Russia and China and also promised to ensure the UK’s visa regime continues to attract the "best and brightest" from India.