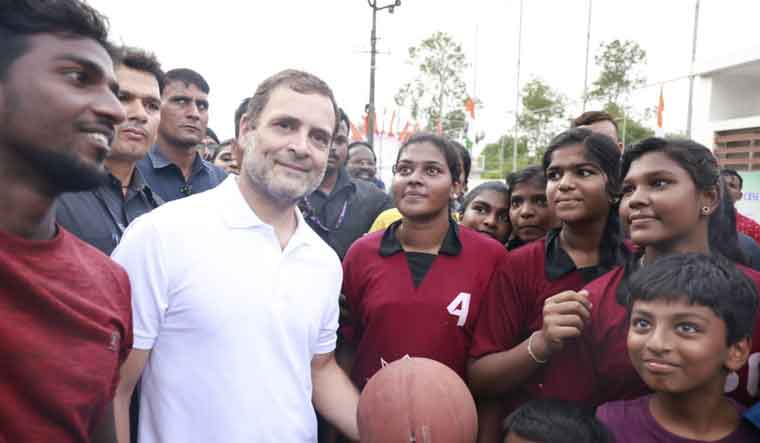 Mulagumoodu is a small town in Kanyakumari, known mainly for its pepper and spices. In March 2021, the town added another interesting snippet to its history: the place where Congress MP Rahul Gandhi accepted and did a push-up challenge. On September 9 evening, Mulagumoodu hosted Gandhi once again. The ICS ground at Mulagumoodu became the campsite for him and his fellow padayatris of the Bharat Jodo Yatra, which was flagged off on September 7 at Kanyakumari.

On Day 4 of Bharat Jodo Yatra, Gandhi and his fellow yatris started their walk from their campsite at 7am. Mulagumoodu's culture is a blend of Malayalam and Tamil elements. And, the padayatra procession also had elements from both cultures. A 'chenda melam' group and a 'thavil' group accompanied the padayatris.

Gandhi and other senior leaders walked behind the Sevadals. The Tamil Nadu Police and CRPF provided protection to Gandhi. The selected 119 Bharat Yatris and 100 state padayatris walked behind this security column of CRPF and Tamil Nadu police. Other than them, over 5,000 workers participated in the morning session of the yatra, according to Tamil Nadu Congress leaders.

The padayatra received a decent welcome—especially from women and children—from the neighbourhoods through which it passed. Junctions like Velliyodu and Swamiyar Madam were crowded with locals who wished to get a glimpse of Gandhi.

At Eraviputhukadai, a group of body-painted men greeted the yatra. Just as it was in the last two days, Gandhi met some cultural figures, students and activists during today’s yatra also. Manikandan Ashan, an expert in Silambam—a martial arts form that has been in practice for more than 3,000 years—performed with his staff for Gandhi. The Congress leader also met M. Vasanthakumari, Asia’s first lady bus driver, on the road. She felicitated him with a shawl. Gandhi also stopped to greet a girls’ basketball team from Packianath Public School, Kattathurai. He interacted with a group of youth who came wearing the T-shirts printed with the message: “I am Walking for a Job”. The first phase of today’s padayatra ended at Nesamony Memorial Christian College in Marthandom. Before starting the second phase of the yatra at 4pm, Gandhi will interact with MGNREGA workers, fisherwomen and disability rights activists.

Today is the last day of yatra in Tamil Nadu. By evening, the padayatra will enter Kerala. The yatris will have their camp at Samuel LMS Higher Secondary School at Cheruvarakonam in the Thiruvananthapuram district. The yatra will traverse through the state for the next 18 days.