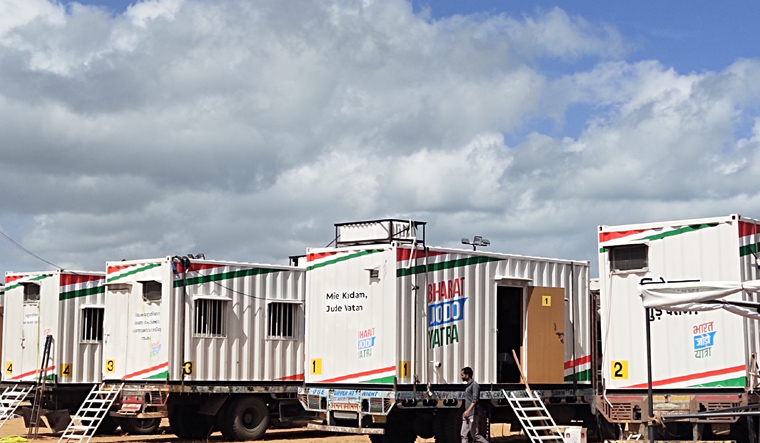 The Congress Party is all set to start its ambitious Kanyakumari-Kashmir Bharat Jodo Yatra. At 4.30pm today, Tamil Nadu Chief Minister M.K. Stalin will hand over the National Flag to Rahul Gandhi to mark the beginning of the yatra. The same flag will be used for the entire stretch of yatra.

At the ground of Vivekananda College, Agastheswaram of Kanyakumari, lies 59 trucks with customised containers mounted on their back. These containers will provide sleep pods and other facilities for 118 Bharat Yatris who would accompany Rahul Gandhi in the entire stretch of the Yatra. Some of these containers can accommodate up to 12 yatris at a time. Rahul Gandhi will be given a separate container for himself. A medical team also will accompany the yatris.

All the Bharat yatris had undergone a three-hour orientation programme at Kanyakumari. “We were instructed about the kind of discipline and behaviour that are expected from the yatris, the respect we should show to all religions, all languages,” says Sunkara Padamshree, 47, an All India Congress Committee member from Andhra Pradesh, who will accompany Gandhi the entire stretch.

The padayatra will cover 12 states and 2 union territories. "In the rest of the states, the state PCCs will organise separate padayatras parallel to the main yatra," said K.C. Venugopal, AICC general secretary in-charge of organisation. "This is a great oppourtunity to gather everybody together. All those who have sentiments against current political dispensation, they all will join with us." The entire yatra will be live-streamed via the bharatjodoyatra.in website.