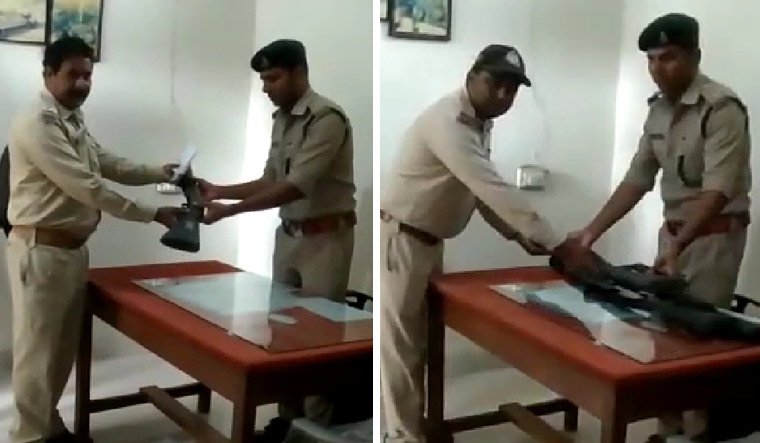 Field staff of Madhya Pradesh forest department – from guards to rangers – surrendered their weapons at respective range forest offices on Tuesday to protest ‘unilateral action’ against a forest team involved in an incident in Lateri of Vidisha district, where a tribal man was killed in firing.

Vidisha police had registered case of murder against eight members of the forest team, though most remained unnamed. One of the named officers – deputy ranger Nirmal Ahirwar—had been arrested on August 12, though he claimed that he was not present on the spot.

Associates of the killed man claimed that the forest patrol team fired indiscriminately on them on the night of August 9 near Katiyapura forest beat in Lateri, killing Chyan Singh and injuring three others of Raipura village. The forest employees had however claimed that the firing was in self-defence after stones were hurled at them by the men who were involved in timber smuggling, which is rampant in the area.

Videos showing alleged timber theft and smuggling had been circulated on social media.

A judicial probe was instituted into the incident following directives of Chief Minister Shivraj Singh Chouhan and a compensation of Rs 25 lakh was announced for the family of Chyan Singh. Compensations of Rs 5 lakh each were announced for the injured persons. Later six more villagers of Raipura had come forward to say that they were also injured in the firing.

The divisional forest officer of Vidisha, Rajbir Singh had been transferred on August 11 as fallout of the incident.

Resentment was brewing among the forest staff and many employees in Lateri had left homes with families to avoid police action, sources said. The employees association had also threatened an indefinite strike. The weapon surrender across the district and division offices of the forest department on Tuesday came in this context. The weapon surrender was reportedly called by State Forest Range Officers Gazetted Association, MP.

Atul Kushwaha, president of the Vidisha unit of the Madhya Pradesh Forest and Wildlife Protection Employees Association, said that forest staff across the state had surrendered weapons in protest of unilateral action in the form of arrests of forest patrol team members in the Lateri incident. “If the forest department has given us these weapons, what is the purpose? If we can’t use the weapons in self-defence, what is their use for us? Therefore, we have decided to surrender the weapons,” he said.

The employees’ association has said that the MP Forest Department has neither declared the armed forest staff as ‘armed forces’, nor is there any clear protocol for protection of the armed staff under the section 197 of CrPC. In such a situation, there is no justification in providing weapons to the forest staff. Rather, the employees and officers are facing criminal cases for using the weapons during forest protection duty. This is making the forest staffers feel unsafe and uncomfortable, as they have to regularly get into encounters with forest mafia and poachers. The unfortunate incident in Lateri, the employees said, was a clear example of this situation.