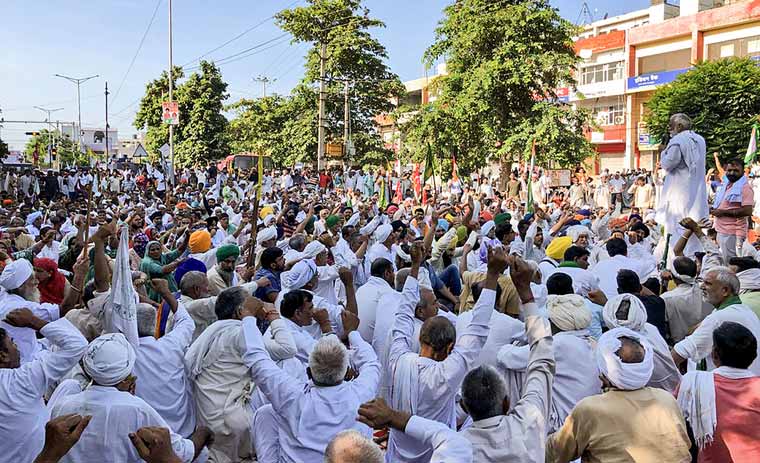 The Samyukt Kisan Morcha (SKM) has announced a 75 hour sit in all districts of Uttar Pradesh and in other states including Punjab, Haryana, Uttarakhand, Madhya Pradesh and Rajasthan from August 18 to 21.

The focal point of this sit in will be Lakhimpur where, on October 3, 2020, three farmers and a journalist were killed in what has since been described as a ‘planned conspiracy’ by the special team investigating it. The prime accused in the case is the son of the Minister of State for Home Affairs, Ajay Misra ‘Teni’.

Community kitchens will be run in Lakhimpur for the farmers who arrive from outside the districts. Food and lodging arrangements will also be made in the neighbouring district of Sitapur.

The aim of this mammoth sit in (or mahapadav in Hindi) is to expose the hollowness of the promises made by the government when it recalled the three controversial farm bills. One of the prominent demands made by the agitating farmers was to make a law on the Minimum Support Price (MSP).

The farmers will also reiterate their demand for Teni to be stripped of his ministerial post and sent to jail.

Another demand is to withdraw the cases lodged against farmers and to release those who had been jailed after the Lakhimpur incident. The families of those farmers and the journalist who lost their lives in the violence are still awaiting compensation from the government. The government had announced a compensation of Rs 45 lakhs for the dead, and Rs 10 lakh for the injured.

Other demands to be made at the sit in include implementation of the recommendations of the Swaminathan Commission on MSP and the disbanding of the committee which is currently debating the MSP issue.

The farmers will also demand the withdrawal of the electricity bill, 2000 as it is ‘against the interests of people’.

Another important demand is that the debts of all farmers throughout the country be waived off. In UP, there will be an appeal to the government to immediately pay all arrears to sugarcane farmers.

Darshan Pal, a member of the SKM’s central coordination committee said, “We have appealed to farmers to throng Lakhimpur in large numbers, and also to turn out in their own districts. We need to show the government that we mean business. The farmers’ agitation is not dead”.