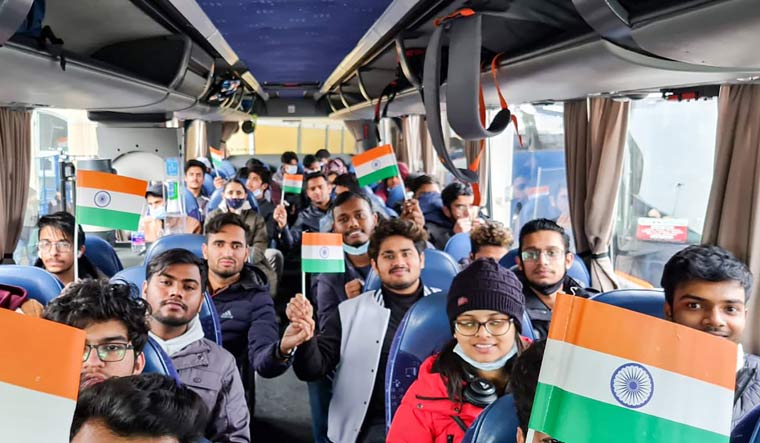 A Lok Sabha committee has recommended that Ukraine-returned Indian medical students be accommodated in colleges in the country, offering some respite to thousands of protesting students waiting to get a clearer picture from the National Medical Council (NMC).

On August 3, the Committee on External Affairs in its 15th report on ‘Welfare of Indian Diaspora: Policies/Schemes,’ urged the Ministry of Health & Family Welfare to consider allowing Indian private medical institutions to enrol returnee students from Ukraine in their institutions on a one-time exemption basis. "The Committee has urged the Ministry to pursue the matter with the MoHFW vigorously as this step alone may solve the current crisis being faced by the students enrolled in Ukrainian universities and enable them to complete their courses," the report stated.

On April 28, MEA had conveyed to MOHFW, that while MEA, through its embassies in countries neighbouring Ukraine, has been exploring the possibilities of continuation of medical programmes for returnee students, there would be limitations on numbers and costs. This was what returnee students and their parents have been stressing that taking transfers to medical universities outside Ukraine will entail more expenses. The Supreme Court had directed the NMC to frame guidelines to accommodate Ukraine-returned medical students in India by June 29, but the NMC did not give any permission to transfer or accommodate foreign medical students in Indian medical institutes/universities. Now, with the building of a gradual consensus around the infeasibility of transfers to other countries, the NMC will be required to consider options within India.

The students, though slightly relieved, do not yet have reasons to rejoice in their struggle to find medical seats and continue their practicals in India since the war between Russia and Ukraine started on February 24. "This is just a proposal from a committee. There's been no response to this from NMC or the health ministry. Similar proposals have been suggested in the past but no action taken. All MPs we approach say only the Supreme Court can help," says Harsh Goel, a third year student of Ivano-Frankivsk National Medical University. "The 2021 NMC guidelines do not even recognise transfers from a parent university for foreign medical students. How did they even expect us to take transfers in the first place when there is no official statement recognising these transfers? My friends and several other students are losing patience now. They are very depressed. They say they are ready to go back to Ukraine if they can't be accommodated in India," he says.