The alleged firer has been arrested 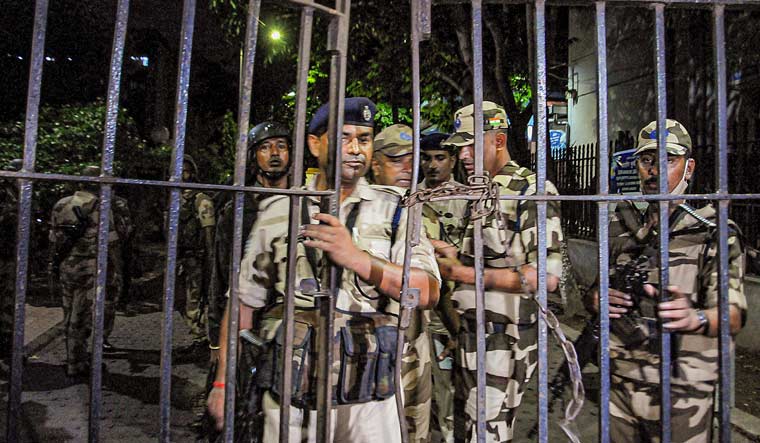 A Central Industrial Security Force (CISF) jawan allegedly shot dead a senior colleague and injured another officer in a fratricidal incident inside their barrack attached to the Indian Museum in Kolkata on Saturday evening, officials said.

The accused head constable who claimed he was being "targetted" in the unit was arrested.

Mishra surrendered after CISF Inspector General (south east) Sudhir Kumar reached the spot and appealed to him to put down his weapon, an official of the para-military force said.

Kolkata Police also said that its officers persuaded him to leave the gun he was holding and surrender.

The accused is alleged to have forcibly taken out the weapon from the unit armoury and emptied the entire magazine as others took cover to save themselves.

After the firing, the two injured men were taken to the state-run SSKM Hospital where Sarangi died.

The CISF has ordered a court of inquiry to ascertain the reasons why the incident occurred.

The incident took place at around 6.30 PM. One CISF jawan has been killed while another is injured. We have arrested the accused head constable," Kolkata Police Commissioner Vineet Goyal said.

After getting information that a firing took place in the museum, the deputy commissioner of police (central), a combat team and a Quick Response Team reached the spot, he said.

We had communicated with the CISF. We successfully convinced the accused (to surrender) after disarming him. We are investigating the matter, Goyal told reporters.

One vehicle was also damaged in the firing in the barrack at the over 200-year-old museum, which is India's "oldest and largest" such facility.

The police took the arrested CISF employee and the damaged car to the New Market police station.

While being taken to a police vehicle, Mishra waved toward journalists present near the museum.

A police officer who was part of the operation said that Mishra was hiding in a small room inside the barrack.

We had to talk to him and convince him to leave the gun and surrender. After much persuasion, he said policemen can enter the room without arms," the officer told PTI.

CISF took over the armed security of the museum, located in Park Street area in the heart of Kolkata, in December 2019.

Founded in 1814, Indian Museum is the earliest and the largest multipurpose museum not only in the Indian subcontinent but also in the Asia-Pacific region of the world.

It is an autonomous organisation under the administrative control of the Union Ministry of Culture.