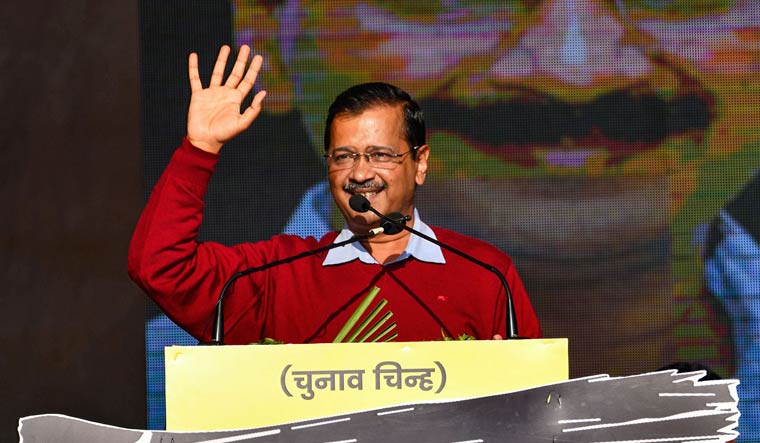 Even as the ruling BJP in Gujarat has gone on the back foot following the recent hooch tragedy that claimed over 50 lives, Aam Aadmi Party convener Arvind Kejriwal appears to be going unstoppable canvassing for his party.

In his second visit to the state in less than a week’s time, the Delhi chief minister took on the BJP and warned the masses that if they voted for the BJP, they would get spurious liquor and unemployment. “If you vote for AAP then you will get good education and healthcare facilities,” he assured.

Like the BJP and the Congress, Kejriwal too has been selective in picking up a section of the society. On Monday, it was his turn to address a gathering, mostly comprising of farmers, at Veraval, near Somnath.

He alleged that a business of Rs 1,000 crore was being done under the name of prohibition. “Gujarat has prohibition, but isn’t liquor available freely?,” he asked the gathering and to which the reply was a loud “yes”.

Kejriwal’s guarantees have been received well by the masses so far and Monday was no exception. He received a thunderous applause from the gathering when he announced that if the AAP is voted to power it would provide job to each unemployed in the first five years.

The unemployed will get an allowance of Rs 3,000 per month till the time they get employment, he said. Making a mention of a youth, who killed self recently in Rajkot after failing to clear a recruitment examination, Kejriwal asked the youth to hold on for just five months.

“Elections are just five months away. Just hold on and do not commit suicides,” he said.

Without naming the BJP, Kejriwal said people come and give promises of Rs 15 lakh and then nothing happens. “We do not do such things. We do what we say,” he said, again reminding the masses that in five years his government in Delhi has given 12 lakh jobs. He claimed that in the next five years they have plans to give another 20 lakh jobs.

He also guaranteed that 10 lakh government jobs will be created. “I have planned it,” he claimed and also assured that in cooperative sector the jobs will be given based on merits and not based on recommendations or corrupt practices.

In Gujarat, which has a history of paper leaks under the BJP rule, Kejriwal said that they will bring a law against paper leaks so that such practices stop totally.

Gujarat, he said, has a public debt of Rs 350 lakh crore and it is not because they are giving anything free to the masses but because of freebies given to those in power.

He sought a referendum in India on whether people want good education or money to be deposited in Swiss Banks.

Kejriwal held that the BJP's model is that of corruption and spurious liquor while the AAP’s is that of good education, healthcare facilities and free electricity.

Earlier, the AAP convener has guaranteed 300 units of free electricity, per month, and better environment for the MSMEs and traders.