Pleased Ayurveda is being used for treating cattle, says PM 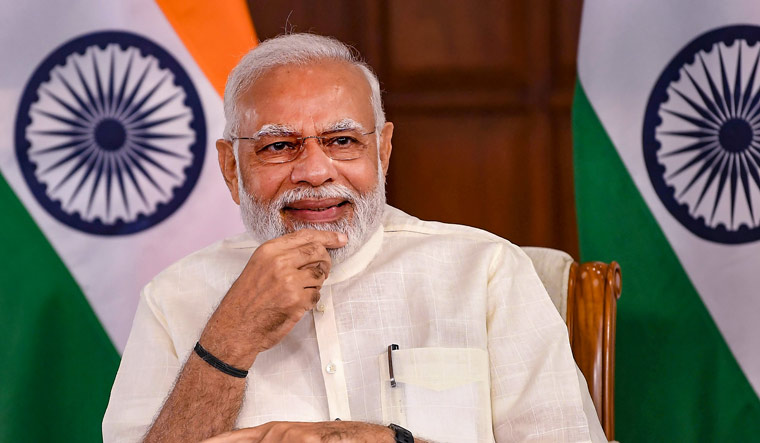 Prime Minister Narendra Modi on Thursday reached out to farmers and tribals from the eastern belt of Gujarat and emphasized various developmental schemes implemented by the Gujarat government and the Centre for their benefit.

He laid the foundation stone and inaugurated several projects, worth over Rs 1,000 crore of the Sabar Dairy, under the aegis of AMUL, at Sabarkantha, North Gujarat.

After beginning his speech in Hindi, Modi switched over to Gujarati to strike a chord with the large gathering. Reminding them that he is not new to the area, the Prime Minister recalled his earlier days by taking the names of people from the dairy sector and also mentioned how the transport operators used to call the passengers.

Modi said that he decided to change the situation at a time when Gujarat was quite often hit by drought. Irrigation facilities were brought in, he said, adding that the dairy stabilized the economy, provided security and newer paths of development.

If the Jyotigram Scheme, to provide electricity to the villages, enabled the establishment of more chilling stations for the milk, thereby reducing wastage, cattle were given health cards, he said. Modi pointed out that he was pleased to know that cattle are being treated with the traditional knowledge of Ayurveda.

“Plastic in kilograms used to be taken out from the stomach of cattle when they were operated upon and that is the time I decided to reduce the use of plastic,” he said.

He also listed out how the Centre is trying to increase the income of farmers, including landless farmers. In the election year for Gujarat when AAP convener Arvind Kejriwal has promised free electricity of 300 units per month to the residents, should AAP come to power, Modi emphasized that the government has not passed on the burden of increased prices of urea to the farmers. A 50 kilogram bag of urea costs the government Rs 3,500 but it is given to the farmers for Rs 300. The government, he said, is now bearing a burden of Rs 2,500 on a 50 kg bag of DAP. Earlier, the burden was Rs 500, he pointed out.

The Prime Minister said that before 2014, 40-crore litre of ethanol was being blended and now it has reached 400 crore litre per year. In the last two years, three crore farmers have been given Kisaan credit cards.

Appreciating the efforts of the farmers and the dairy industry, Modi said that now Gujarat’s dairy market is Rs 1 lakh crore. He said that he had ensured that money for milk sold should be given to women only. “If money goes in the hands of women, they will make the right use of it,” he said, pointing out to the gathering that women just told him that they buy gold when they get increased prices for their produce.

He also made a mention Drupadi Murmu being elected as the first tribal woman president of the country and said that it is a pride for the Indians.
Modi later left for Chennai to inaugurate the International Chess Olympiad.