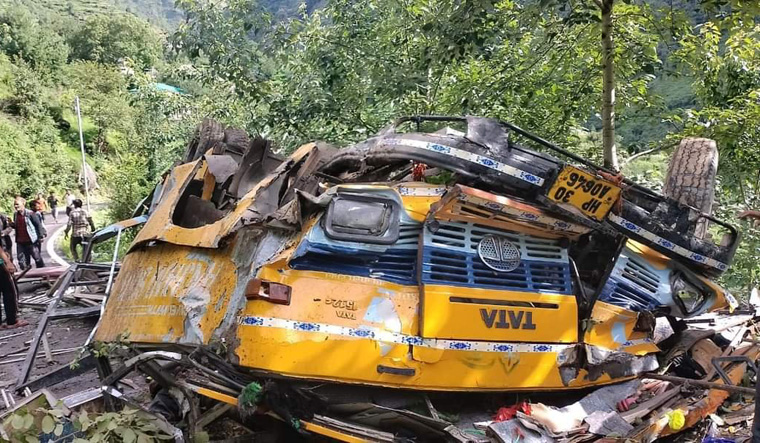 Wreckage of the bus involved in the accident | ANI

A private bus fell into a gorge in Himachal Pradesh's Kullu district on Monday, leaving 12 people, including some school children, dead, a senior official said.

Kullu Deputy Commissioner Ashutosh Garg the school bus was moving towards Sainj from Kullu on Neoli-Shansher road in Sainj valley. He said that death numbers may rise and rescue operations are underway. The DC said the incident happened around 8am. He added that the injured were being rushed to the hospital.

Himachal Pradesh Chief Minister Jairam Thakur said that the entire administration is at the site for the rescue operations. In a tweet, the CM said, “I received news about the private bus accident in Sainj valley of Kullu. The entire administration is present at the spot and the injured are being taken to the hospital. I pray to God to give peace to the departed souls and strength to bereaved families.”

Prime Minister Narendra Modi also tweeted condoling the incident. He tweeted, “The bus accident in Kullu, Himachal Pradesh is heart-rending. My thoughts are with the bereaved families. I hope those injured recover at the earliest. The local administration is providing all possible assistance to those affected.”

The Prime Minister has approved an ex-gratia of Rs. 2 lakh each from PMNRF for the next of kin of those who have lost their lives due to the tragic bus accident in Himachal Pradesh. The injured would be given Rs. 50,000 each, the PM's office tweeted.