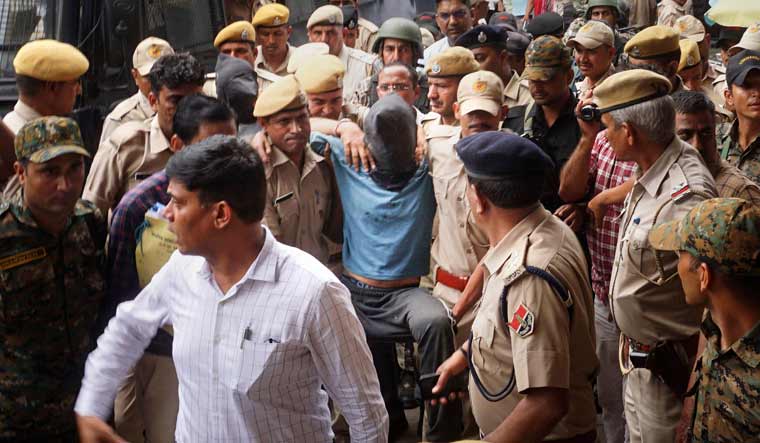 An accused in Kanhaiya Lal murder being produced at an NIA court, in Jaipur | PTI

The National Investigation Agency has widened its probe to examine suspected links, including a similar modus operandi, between the murder of Umesh Kohle in Amravati and the Udaipur beheading. Teams of the NIA and ATS are working closely, visiting the spot and looking for digital and material evidence that may draw any similarities with the way tailor Kanhaiya Lal was hacked to death in Udaipur.

While Lal was allegedly killed over a social media post supporting BJP's Nupur Sharma in the Prophet remark row, the motive behind the Amravati murder is yet to be ascertained.

The incident took place on the night of June 21 when Umesh was on his way home after closing his shop when two men on a motorcycle allegedly stopped him and one of them stabbed him in the neck.

The Union home ministry on Saturday handed over the Amravati killing case to the NIA saying the “conspiracy, involvement of organisations and international linkages will be thoroughly investigated”. The state ATS was probing the case but after the Udaipur killing, the NIA has widened its probe to look at possible links to social media posts and cross-border linkages of the accused in the Udaipur case. The NIA is also examining the possible connections between the arrested accused in the two cases.

If suspected linkages are found in the two killings, it may indicate the emergence of a new terror module where targeted killings, like the ones witnessed in Udaipur and Amravati, is the modus operandi of the attackers.

Meanwhile, the arrested accused in the Udaipur case are being questioned by central intelligence and state law enforcement agencies who are trying to ascertain their inter-state linkages as well as cross-border connections. The ATS teams of neighbouring states like Uttar Pradesh have already reached Udaipur to look at any inter-state links while central intelligence agencies are closely examining the evidence.

The counter-terror officials have found evidence to suggest the crime was an orchestrated and planned conspiracy where each video was uploaded at a particular time and the Pakistani handlers were in touch with them in real time till the killing was executed.

Lone-wolf killings, intelligence officials said, are a dangerous trend as these terrorists appear to be self-radicalised and have undergone indoctrination over the internet using social media platforms, to rope in more radicalised elements across the world, away from the eyes of law enforcement agencies. The suspected links, if any, with cross-border organisations like the Dawat-e-Islami in Pakistan, are also under scanner but central intelligence agencies are trying to tread carefully before they can clearly point towards their role in motivating or radicalising the arrested accused. On its part, the outfit has denied any involvement in the terror acts.

A senior counter-terror official said there is a thin line between terrorists who are linked to a particular organisation being radicalised over a period of time to wilfully carry out a terror act, and those who are self-motivated and are using different organisations and platforms to create a terror module.