The questioning wasn’t acrimonious, according to ED sources 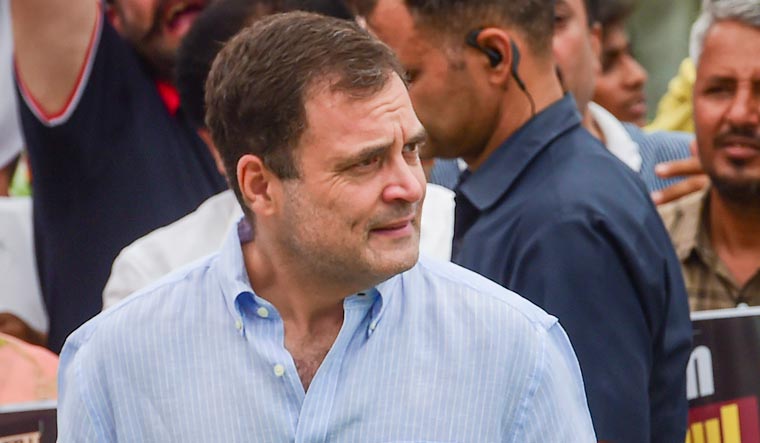 For all the hostility seen on the streets and television screens, the questioning of Congress leader Rahul Gandhi by the Enforcement Directorate (ED) wasn’t acrimonious, according to sources.  Rahul was firm but polite, at times apologetic for taking time, which made his investigators assure him there was no hurry. The reason was ironically common for both—facts gained precedence over the political fight spilling on to the streets.

The ED questioned Rahul on the shareholding patterns and transfer of shares of Associated Journals Ltd, the holding company that publishes the newspaper National Herald, to another company called Young Indian Ltd resulting in alleged illegal benefit of Rs 414.40 crore in the form of several immovable properties which the ED claims was accrued by the Gandhi family.

Sleuths claimed Sonia and Rahul had taken over commercial properties worth around Rs 800 crore belonging to AJL, allegedly using fraudulent means by incorporating Young Indian Ltd in 2010, with a share capital of Rs 5 lakh. The ED says AJL has properties in posh areas of Delhi, Mumbai, Patna, Lucknow and Panchkula in Haryana, most of which were allotted to it by Central and state governments over the decades for specific, non-profit purposes. Rahul has denied all charges and dismissed the case at its inception.

After sessions spread over more than 50 hours and five days, the ED sleuths called for a halt on questioning of Gandhi on the night of June 21. "A large part of 50 hours was consumed by Rahul, who was cautious and revised his replies given to investigating officer," said an official. The ED is learnt to be documenting the "effective examination" which appears to be restricted to 15 hours.

Meanwhile, Sonia Gandhi was summoned on June 23, but she wrote to the ED seeking postponement of her appearance by a few weeks since she has been adviced rest post COVID. The ED has decided to grant her four weeks time.

“There were over 100 questions that were put to Gandhi to get to the bottom of the matter," said an official aware of the pattern of questioning. He spoke on the condition of anonymity.

The devil, indeed, lies at the bottom of the detail. Beneath the civil atmosphere during questioning, the tension was palpable as the ED made no bones about treating him like any other person summoned for questioning. His sister Priyanka Gandhi who was seen accompanying him upto the ED headquarters in central Delhi on all days, had to be stopped at the gate the first day of questioning on June 13 and firmly told she cannot enter the complex.

The rooms where Rahul was questioned was centrally air-conditioned with bare minimum furniture including a table and few chairs, but technologically equipped to record the proceedings.

On an average, 20-25 questions were asked daily, totalling up to more than 100 questions in five days, and Rahul's statement was typed by the ED and signed by the Congress leader.

While ED sources claimed Rahul revisited his replies every evening after the day-long questioning, which prolonged the time spent at the directorate, Rahul stuck to one main point. He said Young Indian Ltd has been created under Section 25 of the Companies Act which, he said, is a not-for-profit company and no dividend could be given to its shareholders or directors. According to the Act, a Section 25 Company is a charitable company prohibiting payment of any dividend to its members .

Everyone in Congress knew that late party leader Motilal Vora handled the AJL-Young Indian business, said an investigator, and it is learnt that Rahul also stated the same to the sleuths when he was asked about the finer points of the matter. But, the question remained whether Rahul Gandhi attributed any criminal motive to what Motilal Vora had done to make the deal go through. The ED sleuths have maintained a studious silence over the finer details of Rahul's questioning. Vora's son Arun, who is a party MLA in Chhattisgarh, has objected to his late father's name coming up in connection with Rahul Gandhi's questioning.

Investigators, too, said they weren’t convinced. They cited documentary evidences that pointed to his role in the company and referred to findings of judicial forums like Income Tax Department, Income Tax Appellate Tribunal and Delhi High Court. The ED had registered an Enforcement Case Information Report in 2021. The predicate offence, which allows the ED to carry out a money laundering investigation, was the Delhi Metropolitan Magistrate's Court order which took cognisance of the offences under section 403, 406, 420, 120B of Indian Penal Code (IPC), relating to the takeover of properties of AJL by Young Indian, investigators said.

In 2014, the court had issued summons to Sonia Gandhi, Rahul Gandhi and others who are currently on bail. The appeal of Gandhi family against the magistrate's judgement before Delhi High Court was dismissed and later by the Supreme Court.

While Rahul is said to have told sleuths that "no money laundering" has taken place , ED officials said the offences under sections 420 and 120B, taken congnisance of by the court, falls into the category of “scheduled offence under the PMLA”. “Since Young Indian has taken over the properties worth more than Rs 800 crore as sequel to these offences, accordingly, the amount of Rs 800 crore [value of the properties] is being treated as "proceeds of crime" under the PMLA,” a sleuth said. "It is a matter of record that these properties have been put for commercial use for earning rent," he said.

Over successive days of questioning, Rahul was also asked about the details of the “charitable activities'' of Young Indian. While Rahul claimed the intention cannot be questioned, ED officials cited lack of records of any charitable work since year 2010 . ED officials said that the argument that if the properties were fraudulently taken over, the benefit will go for charitable purpose is an untenable argument.

Meanwhile, ED investigators also cited the order of the Income Tax Appellate Tribunal in March this year, which spoke of a “corporate veil” used to hide the proceeds of crime. The order said: "The four new entities, including Motilal Vohra, chairman of AJL and Young India after acquiring 99 per cent shares in AJL, became the main shareholder with four of its shareholders acquiring the administrative right to administer the property of more than Rs 400 crore.''

It is on these points that the ED questioned Rahul, drawing a surmise that there was no distinction between the two entities and the entire transaction of transferring shares of AJL to Young Indian was allegedly a "clandestine" one. On Wednesday, Rahul claimed his questioning  by the ED has sparked energy in party workers across the country. The Congress party, he said, has patience, as they are fighting for truth. The ED officials, on their part , claimed to have shown patience as well for the marathon questioning.