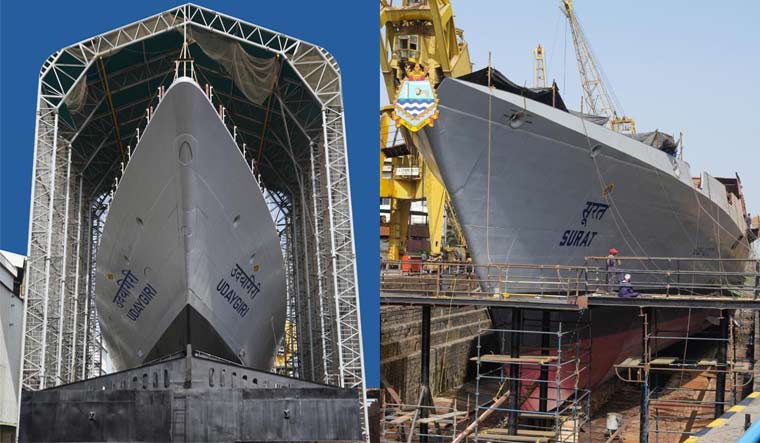 Expanding its strategic reach, India on Tuesday launched two of its most technologically advanced missile carriers' warships. Defence minister Rajnath Singh pressed the button for the launch of made-in-India warships 'Surat' and 'Udaygiri' at the Mazagon Docks in Mumbai. This is the first time that the two indigenously built warships have been launched together.

Speaking at the event, Rajnath Singh said that the "two warships will add might to the Indian Navy’s arsenal and represent to the world India’s strategic strength as well as the power of self-reliance," while adding that INS Udaygiri and INS Surat are the shining examples of India’s growing indigenous capability".

While Surat is part of the Indian Navy's  Project 15B class of next-generation stealth guided-missile destroyers, Udaygiri is the third ship of Project 17A Frigates.

'Surat' is the fourth ship of the project which heralds a significant makeover of the P15A (Kolkata Class) destroyers with an overall budget of Rs 35,000 crore. And, under the P17A programme, a total of seven ships, with four at MDL and three at Kolkata-based Garden Reach Shipbuilders & Engineers Ltd (GRSE) are under construction with an estimated cost of Rs 45,000 crore.

Both 15B and P17A ships have been designed in-house by the Directorate of Naval Design (DND). During the building phase at the shipyard, around 75 per cent of the orders for equipment and systems have been placed on indigenous firms including MSMEs.

Built by Mazagon Docks Limited, these two warships will be among the most technologically advanced missile carriers in the world.

Asserting that global security, border disputes and maritime dominance have led nations around the world to modernise their military, the defence minister exhorted the public and the private sectors to make full use of the capabilities by taking advantage of the government’s policies and contribute towards making India an indigenous shipbuilding hub.

"In the times to come, we will not only fulfil our own needs but will also meet the shipbuilding requirements of the world. We will soon realise Prime Minister Shri Narendra Modi’s vision of ‘Make in India, Make for the World’,” he said.

Focussing on the Atamnirbhar Bharat mission, more than two-thirds of the Navy’s modernisation budget has been spent on indigenous procurement in the last five financial years. Of the 41 ships and submarines ordered by the Navy, 39 are from Indian shipyards.

Singh described the warships as an embodiment of India's unwavering commitment to enhancing the country’s maritime capability, with a focus on achieving ‘Aatmanirbharta’, at a time when the world is witnessing disruption in the global supply chain due to Covid-19 and the Russia-Ukraine conflict.

To counter the Chinese military's growing influence, India focuses on its naval power. The Navy has 130 ships and submarines, with 39 more vessels under construction, besides the two frigates being built for the Navy in Russia.

On the contrary, the Chinese navy has a battle force of around 355 ships and submarines, including more than 145 major surface vessels. By 2030, it is expected to operate around six aircraft carriers, according to a report prepared by the Pentagon. While China has been inducing 12-13 ships every year, India has only commissioned 2-3 ships annually, on average.

The defence minister further said that if a country wants to safeguard its national interests, it should project its military prowess in areas far beyond the mainland. "If a country has aspirations to become a regional or global power, it is necessary to develop a strong Naval force. The government is making all efforts in this direction. We want to make a strong, secure and prosperous India, which is recognised as a global power,” said Rajnath Singh.