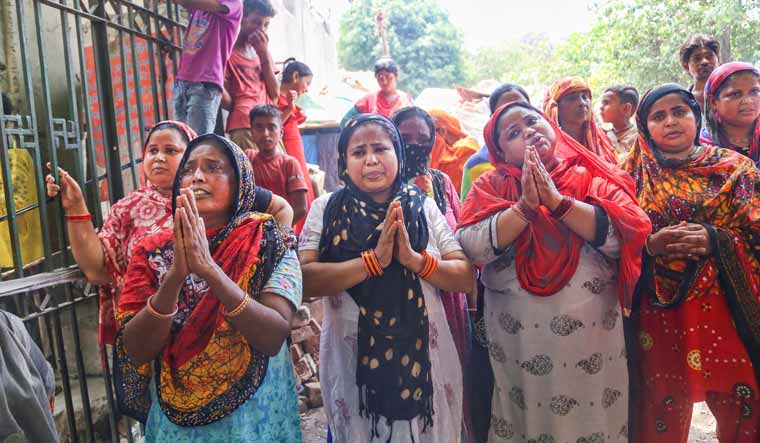 Residents in Karol Bagh protest against an anti-encroachment drive | PTI

Delhi Chief Minister Arvind Kejriwal on Monday lashed out at the ongoing anti-encroachment campaigns in Delhi being carried out by civic bodies, which are controlled by the BJP.

Kejriwal told a press conference the BJP planned to make 63 lakh people homeless. Kejriwal said “People are begging for mercy, but papers are not being seen, bulldozer is being driven directly. The BJP had made an election promise that it would make sure the kacchi colonies would be made pucca, where the slums were, there houses would be given. Now they are going to destroy their houses.”

Kejriwal noted nearly 50 lakh people stay in unauthorised colonies, 10 lakh in 'jhuggis' and there are lakhs of people who have modified balconies or done something that did not conform to original maps.

“That means homes and shops of 63 lakh people will be bulldozed. This will be the biggest destruction happening in independent India,” he said.

Kejriwal argued more than 80 per cent of Delhi could be considered encroached due to faulty planning. “But if a person is with rightful papers, then why are bulldozers... being used. This is not right. They have a plan to demolish all kacchi colonies and jhuggis,” Kejriwal was quoted as saying by News 18.

Kejriwal questioned the BJP for not acting to regulate encroachments. “From last 15 years, BJP is in MCD. What have they done in this last 15 years? They themselves did encroachments taking money,” Kejriwal was quoted as saying by News 18.

Kejriwal promised to regularise illegal colonies. “We will free Delhi from Jhuggis and will make new home for them. Will give time to those who have encroached on roads... so that they can remove it,” he said. Kejriwal declared he and AAP MLAs were ready to go to jail, but would not accept hooliganism.