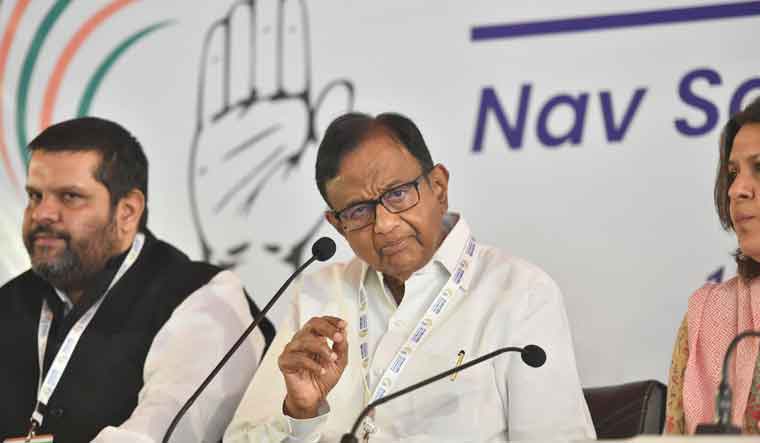 The Congress finds hope in the failure of the BJP's India Shining Campaign in the Lok Sabha elections in 2004 as it looks for effective ways to reach out to the people on issues relating to economic distress, such as inflation and unemployment, even as it will emphasise upon the need for a reset of economic policies in place since the liberalisation initiated in 1991.

These are among the highlights of the discussion on economic issues at the Congress’ Chintan Shivir underway in Udaipur.

Senior Congress leader P. Chidambaram, who heads a panel discussing what should be the party’s stance and strategy with regard to economic issues over the next two years in the run up to the Lok Sabha elections in 2024, admitted that while economic distress has not taken the shape of a large protest, it was bound to become one.

Asked about the BJP continuing to register electoral wins despite issues such as inflation and lack of jobs, Chidambaram said, “the people feel the pinch of loss of jobs…During the campaign in Goa, I saw how every other home made a plea about a son or a daughter or a nephew not having a job. Therefore we are right in our assessment of the mood of the people.”

The Congress president had set six groups prior to the Chintan Shivir to deliberate on issues under six different heads, with Chidambaram heading the panel on economy. The panel has nine members besides Chidambaram and they are joined by 60 leaders at the brainstorming camp for an elaborate discussion.

Among the broad conclusions of the group, according to Chidambaram, is the need for a reset of economic policies in place since the liberalisation of the economy in 1991 that was undertaken by the Congress government of that time.

“A Congress-led government ushered in a new era of liberalisation in 1991. The country has reaped enormous benefits in terms of wealth creation, new businesses and new entrepreneurs, a huge middle class, millions of jobs, exports and lifting 27 crore people out of poverty during a 10-year period. After 30 years, it is felt that taking into account global and domestic developments, it may be necessary to contemplate a reset of the economic policies,” he said.

He, however, clarified that a reset of economic policies does not mean stepping back from liberalisation, but stepping forward with it. The former union finance minister said a reset of economic policies must also address the questions of rising inequalities, extreme poverty among the bottom 10 per cent of the population, India’s rank in the Global Hunger Index 2021, which is 101 out of 116 countries, and evidence of widespread nutritional deficiency among women and children.

While underlining that the state of the Indian economy is a “cause of extreme concern,” and commenting that a slower rate of growth has been the hallmark of the present government in the last eight years, the panel has in its conclusions talked about inflation and jobs being at unprecedented levels.

“Inflation has risen to unacceptable levels, and threatens to rise further. WPI inflation is at 14.55 per cent and CPI inflation is at 7.79 per cent. The government is actually fueling the rise of inflation by its wrong policies, especially through high taxes on petrol and diesel, high administered prices and high GST tax rates,” Chidambaram said while listing out the conclusions of his panel.

The panel has also listed amongst its shortlisted conclusions that the job situation has never been worse. “The Labour Force Participation Rate is at a historic low of 40.38 per cent and the unemployment rate stands at 7.83 per cent,” Chidambaram said.

While noting that the external situation has added to the pressures on the economy, the panel feels that the government appears clueless on the ways to deal with these developments. It has pointed out that USD 22 billion has flowed out of the country in the last seven months, the foreign exchange reserves have depleted by USD 36 billion and the exchange rate stands at Rs 77.48 to a dollar, the highest ever.

It has suggested that a comprehensive review would also be justified by the health and education outcomes as revealed by the Annual State of Education Report 2021 and the National Family Health Survey-5.

Claiming that even finance ministers of BJP-ruled states have expressed dismay at the complete breakdown of trust between the Centre and the states, Chidambaram said it was emphasised in the panel meetings that the time is ripe for a comprehensive review of Centre-States fiscal relations. “The consequences of the poorly-drafted and unfairly-implemented GST laws brought in by the Modi government in 2017 are there for everyone to see. The States’ fiscal position is fragile as never before and needs urgent remedial measures,” Chidambaram said.

In response to a question, he said that the states’ GST dues should be paid to them immediately and the time period for payment of compensation to the states should be extended by at least three years.