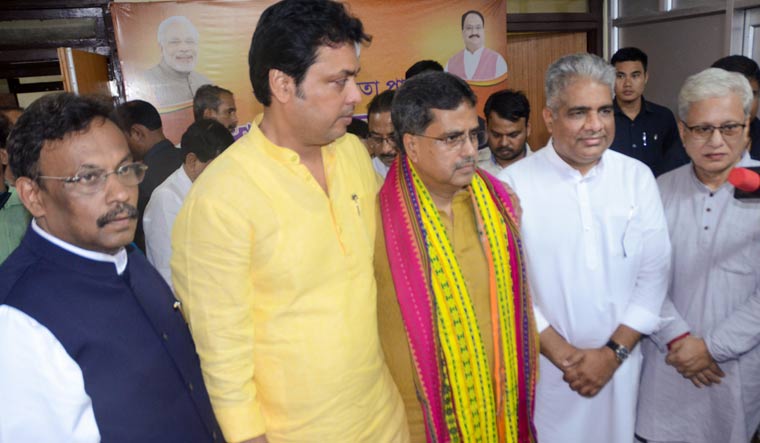 BJP's Rajya Sabha MP Manik Saha will take oath as the chief minister of Tripura on Sunday after Biplab Kumar Deb resigned from the post in a surprise move ahead of the Assembly elections due next year. Saha was elected BJP Legislative Party leader at a hurriedly called meeting at the chief minister's official residence soon after Deb tendered his resignation.

The meeting witnessed some unruly scenes with state minister Ram Prasad Paul protested against the elevation of Saha to the top post. According to reports, Paul wanted deputy chief minister Jishnu Dev Varma, a member of the erstwhile Tripura royal family, as the next chief minister. A video showing the minister breaking a few chairs and screaming “I will die” has surfaced online.

A section of the party leaders is reportedly upset with Rana being named as the next chief minister. They alleged that they were not consulted and that the party central leadership took the decision arbitrarily.

"I was a common worker of the party and will continue to be so," Saha told reporters after the meeting.

The BJP has changed five chief ministers since 2019, including in Gujarat and Karnataka.

Saha is also the fourth former Congress leader from the Northeast to become chief minister in the region after joining the BJP, a clear signal that a leader's electoral value is of paramount importance for the party.

"Party is above all. I am a loyal worker of the BJP. I hope I have done justice to the responsibilities that were given to me -- whether it was BJP state president or Tripura chief minister. I have worked for the overall development of Tripura, and to ensure peace for the people of the state," he told reporters.

"The party wants me to work to strengthen the organisation," he said.

Deb had met Union Home Minister Amit Shah and BJP president J.P. Nadda in Delhi on Thursday. His resignation came amid rumours of infighting in the party's state unit.

According to reports, the saffron party wanted to go with a fresh face in the Assembly polls and Deb would be engaged in organisational work.